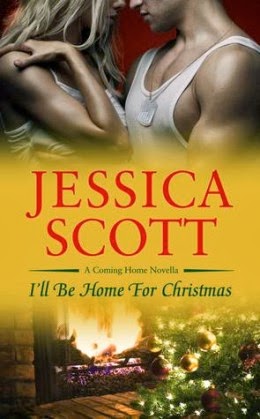 There's nothing in the world Army Sergeant Vic Carponti loves more than his wife and his country. Smart-mouthed and easy tempered, he takes everything as a joke...except his promise to come home to his wife, Nicole, for Christmas. As he prepares to leave for his latest deployment into Iraq, Vic will do everything he can to shield his beautiful, supportive wife from the realities of war...and from his own darkest fears.

As a career army wife, Nicole Carponti knows just what to expect from her husband's tour of duty: loneliness, relentless worry, and a seemingly endless countdown until the moment Vic walks through the door again. But when the unthinkable happens, Nicole and Vic's bond is tested like never before and changes everything they believe to be true about the power of love and the simple beauty of being home for the holidays.

Review:
We first met Vic and Nicole Carponti in Jessica Scott's debut novel Because of You and I have to admit I fell for Carponti immediately. I never expected that we'd get to see their story though because they were already a couple so I was surprised but thrilled when I heard about I'll Be Home for Christmas. I have to say I wasn't disappointed and I think this was my favourite story in the series so far! Although it isn't essential I would recommend reading Because of You before you pick up this one, the time line for this one crosses over with the full length book and I think you'll be more invested in this story if you know the background and some of the other side characters who get a mention.

Vic and Nicole are head over heels in love, they have a solid relationship and a happy marriage but that doesn't mean it is easy for either of them when they are separated while Vic goes on tour of duty. Vic worries that Nicole will get sick of waiting for him and meet someone else, he also worries that something may happen to him and how she would cope if he doesn't make it home. That's on top of the pressures of war, worrying about his men and the horror of seeing his friends injured or worse. Nicole may be safe at home but that doesn't stop her stressing about what Vic is going through, she misses him like crazy and hates it when he is out of contact for long periods of time but she knows how much strain he is under and doesn't want to add to it by complaining. She does her best to support her man but it's not easy, especially when she is facing Christmas alone not long after the death of her father.

I love how honest Jessica Scott is about how hard it can be not just for soldiers but also for their loved ones who remain at home. You can tell that she writes from experience and that just makes her stories all the more heartfelt and poignant. I can't say too much without giving spoilers but if you've read Because of You you'll already know what happens to Vic in this story. I think knowing what was to come made this even harder to read but I loved him even more for the way he deals with everything that happens to him. I also have a huge amount of respect for Nicole for the way she supports him. What drew me to Vic in the first place was his sense of humour, he is full of one liners and snarky comments that often get him into trouble but they really help to lighten what could have been quite a dark read. You quickly find out that Vic uses humour as a coping mechanism and as a way to keep up moral within his team but he does have a much more serious and responsible side that he keeps well hidden.

It's not often that I give 5 stars to a novella but I'll Be Home for Christmas deserves every single one of them. It made me laugh, it made me cry and it left me with a warm and fuzzy feeling inside which made it a perfect Christmas treat! It also really helped build my excitement for Back to You, I've been desperate to read Trent and Laura's book since I read Because of You so I'm very relieved that it is finally being published in January.