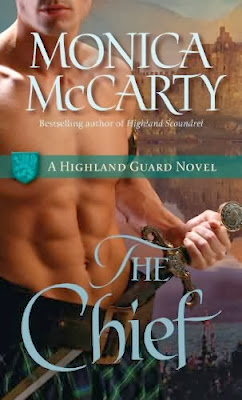 An elite fighting force unlike the world has ever seen . . .

Scouring the darkest corners of the Highlands and Western Isles, Robert the Bruce handpicks ten warriors to help him in his quest to free Scotland from English rule. They are the best of the best, chosen for their superior skills in each discipline of warfare. And to lead his secret Highland Guard, Bruce chooses the greatest warrior of all.

The ultimate Highland warlord and a swordsman without equal, Tor MacLeod has no intention of being drawn into Scotland’s war against the English. Dedicated to his clan, the fiercely independent chief answers to no one—especially not to his alluring new bride, bartered to him in a bid to secure his command of the deadliest fighting force the world has ever seen. The treacherous chit who made her way to Tor’s bed may have won his hand, but she will never claim his heart.

Although her husband’s reputation is as fierce as his manner, Christina Fraser believes that something softer hides beneath his brutal shell. But the only warmth she feels is in their bed, in glorious moments of white-hot desire that disappear with the dawn. When Christina’s reckless bid to win her husband’s love goes awry and thrusts them into danger on the eve of war, Tor will face his ultimate battle: to save his wife and to open his heart—before it’s too late.

Highland Guard:
The Chief
The Hawk
The Ranger
The Viper
The Saint
The Recruit
The Hunter
The Raider (2014)

Review:
It's been a long time since I read a highlander romance, in fact I've not read much in the way of historical romance since in the last few years and I was in the mood for something different. When my friend suggested buddy reading the Highland Guard series the covers immediately caught my eye and it didn't take much to persuade me to grab a copy of The Chief and get started. This was my first book by Monica McCarty but it definitely won't be the last and I can't wait to carry on with this series!

When Tor MacLeod is asked to create a secret Highland Guard for Robert the Bruce it's the last thing he really wants to do, he'd rather keep his clan safe and away from danger but he isn't given much choice in the matter. Things are made even worse when he is forced to marry Christina Fraser, he had no intention of taking a wife - especially not a woman who could trick him so badly. To say their relationship doesn't get off to a great start is an understatement but no matter how hard he tries to resist her charms he finds himself wanting more and more from his wife. Christina struggles to understand how the passionate man who adores her by night can become so cold and distant during the day, she desperately wants her marriage to work and will do whatever it takes to prove to him that she can be an asset to Tor's clan if he'll just let her help him.

I have to say that Christina's father is one of the most despicable men I've ever come across and if ever there was a fictional character I want to see die a slow and painful death it was him! I immediately felt for Christina and her sister, they were put in an impossible situation and I really admired Christina for the fact that she was willing to sacrifice her own happiness to keep her sister safe. Christina could come across as quite naive at times but she has a heart of gold and is very protective of the people she cares about. She is also intelligent, knows what she wants and works hard to achieve her goals. There were times I wanted to shake Tor for his treatment of her so I was incredibly proud of Christina towards the end when she took a stand and decided enough was enough. She was just such an easy character to like and I was so pleased with the way things worked out for her.

Tor could be incredibly stubborn, he was also arrogant, very in control of his emotions and sexy as hell. I was equal parts frustrated and head over heels in love with him at times. He has spent years doing whatever he can to protect his clan, the last thing he wants is to get involved with Scottish politics that could drag his clan into a war they didn't choose but thanks to his brother's actions he doesn't have much choice. When the odds are against him Tor does what any warrior would and comes out fighting, he won't let anyone back him into a corner without extracting his revenge and he will fiercely protect his men and his clan. I found it incredibly amusing watching Christina win his heart, the fact that he was so determined to keep her at arms length and refused to see what was happening between them was hilarious - he really was the last person to realise that he had fallen in love with her.

Seeing Tor in action training the Highland Guard was great and the camaraderie and banter between the men was probably one of my favourite parts of the story. Each of these warriors is getting their own book, in fact there are already six more books available with the eighth releasing early next year so I have plenty of catching up to do. If the whole series is as good as The Chief then Monica McCarty will soon find herself added to my favourite authors list! This story has everything you'd hope for from a highlander romance, sexy warriors in kilts, a strong heroine who will stand up to her man, a romance that is both sweet and incredibly sexy plus action, mystery and intrigue. Definitely a must for fans of historical romance and sexy highlanders!