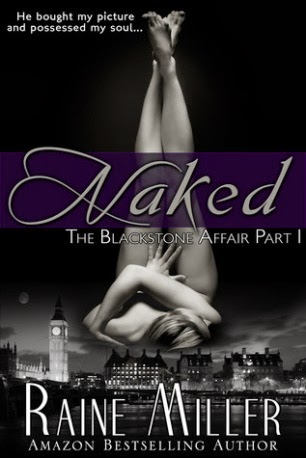 Brynne Bennett has left scandal in her past and is living the good life. An American grad student at the University of London and part-time photographic model, she’s getting back on track with lots of hard work and focus on a career in art conservation. When London businessman Ethan Blackstone buys her nude portrait, he wants to possess more than just her image. He wants Brynne in his bed, serving him in every way possible. He has no trouble voicing his desires, and he isn't taking no for an answer.

At first his dominant nature captivates her, but it isn't clear if the force of his powerful desire will ultimately awaken or dispel the demons Brynne is carrying inside. There are secrets on both sides of this relationship—huge ones. Can Ethan erase the scars of Brynne's past so that she can reveal her true self to him? Or will the shadows cast by Ethan's own mysterious former life destroy their chance at happiness?

Naked is the sizzling, unforgettable story of what happens when a strong woman meets the one man powerful enough to strip away all her defenses, leaving her standing naked and perfect before him.

Review:
I'd heard a lot of good things about the Blackstone series so was looking forward to reading Naked. I will say that it's a quick and easy read but it's not without it's problems and I didn't enjoy it quite as much as I expected to. I am curious enough that I'll be reading the next book though and I'm hoping that the teething problems will be ironed out in the next book.

One of the things that irritated me most about this book was that the story is set in London and has a very British hero Ethan but a lot of the slang used was decidedly American. I could understand this when it came to the American heroine but when you have Ethan asking her if she bought him Jolly Ranchers at the chemist I was just rolling my eyes (I have to point out here that as a Brit I'd never even heard of Jolly Ranchers and had to look them up online to see what they were - you certainly can't buy them in any old shop in London although I'm sure you could find them in specialist shops that import American sweets). I think I was doubly disappointed by the Americanisms because I'd been so excited to find a story set in London for a change but when I was actually reading it I found it could just as easily have been set in any US city. I'm aware this won't be such a big problem for every reader but it did spoil my reading experience somewhat.

While I liked Ethan and the chemistry between him and Brynne was certainly explosive I do wish there had been more time spent seeing them get to know each other before they started declaring undying love. I've said a million times that I can completely get on board with instant attraction - it's how most relationships start isn't it! - but I'm so sick of insta-love. I want to see the characters talking to each other, spending time together outside of the bedroom and finding mutual interests etc before I can believe they're head over heels in love. I also found myself a little irritated with how pushy and overbearing Ethan could be at times. I wanted Brynne to stand up for herself more and make him go at a pace she was more comfortable with but considering some of her ridiculously stupid actions I guess I shouldn't be surprised that she let him walk all over her. There really were times when I thought Brynne must have a death wish considering how often she put herself at risk with a total stranger, Ethan may have been incredibly sexy but she knew nothing about him when she got into his car and let him drive her home the first time and that wasn't even the daftest thing she did! I put a lot of her actions down to her age but I really hope she engages her brain a bit more in the next book.

I know I've done a lot of complaining about this story but it wasn't all bad, like I said before it was a very easy book to read and that is quite a compliment considering some of the problems mentioned have made it impossible for me to finish reading other books. I'm curious about the secrets Brynne is keeping and I do want to see how Ethan is going to redeem himself after revelations made towards the end of this book. Naked is quite a short story and I do think that is the reason for the lack of relationship development so I'm hoping to see a lot more of that in the sequel. I'm also hoping that the author will make the most of the London setting as the series continues.