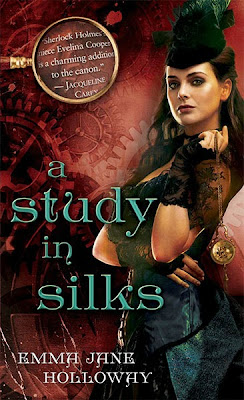 Evelina Cooper, the niece of the great Sherlock Holmes, is poised to enjoy her first Season in London Society. But there’s a murderer to deal with—not to mention missing automatons, a sorcerer, and a talking mouse.

In a Victorian era ruled by a council of ruthless steam barons, mechanical power is the real monarch and sorcery the demon enemy of the Empire. Nevertheless, the most coveted weapon is magic that can run machines—something Evelina has secretly mastered. But rather than making her fortune, her special talents could mean death or an eternity as a guest of Her Majesty’s secret laboratories. What’s a polite young lady to do but mind her manners and pray she’s never found out?

But then there’s that murder. As Sherlock Holmes’s niece, Evelina should be able to find the answers, but she has a lot to learn. And the first decision she has to make is whether to trust the handsome, clever rake who makes her breath come faster, or the dashing trick rider who would dare anything for her if she would only just ask.

Review:
After really enjoying the prequel short story The Adventure of the Woolaston Ritual (you can read that for free on the author's website) I was really looking forward to reading A Study in Silks. Unfortunately although I liked the story it failed to live up to expectations and I didn't enjoy it as much as I expected to. I think my main issues were to do with the pacing, this is a long book (over 500 pages) and at times it really struggled to hold my interest. I think the main cause of the problem was the multiple points of view, I counted at least 7 different POVs and it seemed like you'd go multiple chapters without hearing from the main character. I loved Evelina's voice and I enjoyed the occasional chapters from her love interests and even her best friend Imogen but when you start adding more than that it just became too much and it gets to the point where the reader has too much information about what is happening. I wanted to be able to uncover the mystery alongside Evelina not find out everything in advance and I lost interest in her investigation because of that.

To move on to the positives I have to say I really loved the world building and I'm hoping the teething problems were just down to this being the first book in the series. Evelina is a great heroine, she is intelligent and has her uncle Sherlock's curiosity and ability to tie clues together. She is still young and idealistic so she does make mistakes but her heart is in the right place and she always tries to do the right thing. I loved her magical abilities, I don't want to say too much about them because I'd rather let you discover them for yourselves so I'll just say her pets were one of my favourite things about the story. I really liked the strong bond that Evelina has with her best friend Imogen, the two of them are more like sisters in a lot of ways and I always appreciate strong female friendships in my stories. Imogen is Evelina's complete opposite in a lot of ways, she had a very different upbringing and her family have high expectations of her making a good match but she has a rebellious streak that makes her keen to help Evelina with her investigation. The two girls often get themselves in trouble but they always have each other's backs.

I was slightly disappointed when I discovered that this series was going to have a love triangle (I'm so sick of seeing them in pretty much every YA series I read) but I have to say I was impressed with the way this one was handled. For the majority of the book I couldn't decide which of the two guys I liked more, I kept switching back and forth from Nick to Tobias and it wasn't until near the end when I finally decided which team I'm on. The two men couldn't be more different to each other but I could see why Evelina was drawn to them both. Nick is someone she grew up with, someone she has always been able to rely on and who understands her completely, he is her best friend and they have a shared past that will always tie them together. Tobias on the other hand is everything she should be looking for in a husband, he is Imogen's brother and someone she has liked from afar since she first met him. He is a rake and a playboy but he is from the right kind of family and marrying him would assure her of her place in society, something that is important to her considering the scandal in her family history. I think Evelina is going to have to choose a guy based on what she wants her future to be like and I'm REALLY hoping she'll want to live a life of adventure with Nick!

Of course I can't talk about this book without mentioning Sherlock, Evelina is his niece and she contacts him for help when she has trouble with her investigations. He is absent for the majority of the book but I loved every scene he was in, I'd actually have much preferred spending more time with him than with some of the other characters we are subjected to! Although the issues I had with A Study in Silks turn this into a middle of the road read rather than the fantastic one it could have been I like the characters and the world enough to read the next book. The pacing of this story picked up considerably during the last 20% or so and if Emma Jane Holloway can only follow that through into the next book I can see myself devouring the rest of the series.