Review: The Beautiful and the Cursed - Page Morgan 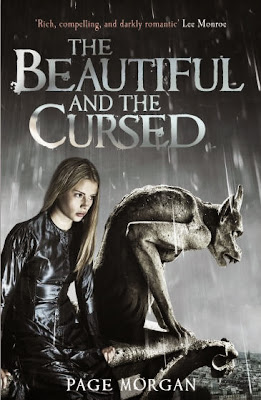 Ingrid Waverly is a girl to be reckoned with.

Faced with their beloved brother's disappearance, Ingrid and her sister Gabriella move to Paris, determined to find him. But instead the sisters are drawn into a terrifying underworld - watched over by Luc and Nolan, two impossibly handsome protectors with dark secrets of their own . . .

Amongst the Gothic streets and alleys of nineteenth-century Paris, otherworldly secrets, deadly attractions and hidden powers stalk Ingrid and Gabriella, and love is found in the most unexpected ways.

A thrilling and forbidden romance.

The Dispossessed Series:
The Beautiful and the Cursed
The Lovely and the Lost (2014)

Review:
Ingrid and Gabby have just arrived in Paris with their mother where they are supposed to be joining their brother Grayson at the abbey he has recently purchased. They are shocked to discover that Grayson is missing though and that he has left no clues to his whereabouts. Both sisters are determined to do whatever it takes to find him but they quickly find themselves out of their depths when they uncover supernatural forces at work.

I have to confess I was drawn to The Beautiful and the Cursed because of the cover, it's got such a wonderful Gothic feel to it and instantly made me want to read the story. You don't seem to find many books that have gargoyle characters so I was really enjoyed reading the mythology Page Morgan has created for them. As someone who reads a huge amount of paranormal stories it's refreshing to come across something quite so unique and I loved the story for that. The gargoyle characters are fascinating and I developed a real soft spot for Luc as I got to know him better. I also loved the darker feel to the setting, I would have liked to have spent more time exploring Paris in 1899 but I liked what we did see and I'm hoping there will be a lot more as the series continues.

Ingrid and Gabby may be sisters but their characters are very different. Ingrid is calmer and more collected, she thinks things through before she acts and is much more sensible, Gabby on the other hand is impulsive and over emotional, she acts without thinking and often gets herself in trouble because of it. She is the younger of the two sisters and the one I found it hardest to connect to, I admired her bravery but felt she was selfish and was often irritated by her actions. I'm hoping we'll see her do a lot of growing up as the series continues! I enjoyed Ingrid's interactions with Luc, there is a forbidden aspect to their romance which adds to the tension between them and I liked the fact that their relationship is developing very slowly. I was slightly irritated by the fact that we have a triangle appearing to develop (that's become a real pet peeve of mine in YA books recently!) but I'm pleased to say that doesn't overshadow the story.

The Beautiful and the Cursed is a great start to the series and I'm definitely looking forward to seeing how things progress in The Lovely and the Lost. If you're looking for a slightly darker YA series than normal, one with a historical setting, lots of action, romance and some unusual supernatural creatures then I'm sure you'll enjoy this one.