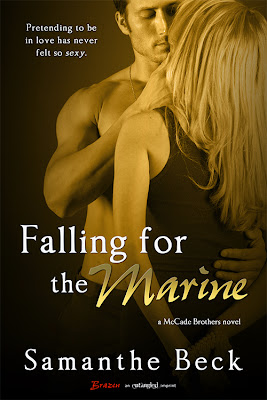 Pretending to be in love has never felt so sexy.

USMC helicopter pilot Michael McCade has two goals: Get his damn back into alignment and keep his nose clean until his ultra-conservative commanding officer clears him to fly again. The doctor-recommended massage therapy seems like a necessary evil if he's to return to the cockpit, but when his too-hot-to-handle neighbor turns out to be his masseuse, he strays from the straight and narrow in a major way.

Former military brat Chloe Kincaid is looking for an ego-boosting, no strings attached hook up. But when her positively panty-melting neighbor (aka Major Hottie) shows up on her massage table, their off-the-charts chemistry overrides her no-military-men policy until they're caught. Now they have to fake an engagement to avoid the fallout, but can a girl who runs from attachments pretend to be in love with a straight-arrow soldier without falling hard?

Review:
Michael is a helicopter pilot with the USMC, after injuring his back he has been grounded and all he can think about is getting back to full strength so he can fly again. He's not convinced that massage therapy is going to make any difference to his back but he's willing to try anything and it doesn't hurt that his hot new neighbour Chloe is his masseuse. Chloe is a free spirit, she loves to travel and never spends too long in one place, she isn't looking for love and the last thing she needs is a relationship that is going to tie her down. She is more than up for a hot fling though and Michael is impossible to resist. When the pair of them are caught in a compromising position they find themselves forced into a fake relationship so they don't destroy both of their careers. Can Michael convince Chloe that his feelings for her are anything but fake and get her to take a chance on a real relationship?

I have become a huge fan of Samanthe Beck since discovering her earlier this year and I have to say Falling for the Marine was my favourite of her books so far. This story is a sequel to Lover Undercover and Michael is the brother of previous hero Trevor but although I would happily recommend both stories it isn't essential to read them in order and this would work well as a stand alone. If you're looking for a fun contemporary romance full of humour, great characters, hot chemistry and sweet romance then you don't want to miss this.

I absolutely loved Michael, he is pretty much everything you could wish for in a guy - sweet, funny, caring, protective and sexy as sin. He loves his job, is proud to serve his country and his nickname "Major Hottie" suits him perfectly! Chloe is a really sweet girl, she has been through a lot and that has made her wary of getting hurt again but there is no way she can resist Michael's charm or the attraction she feels for him. This couple is incredibly hot together but they also have a strong connection and become good friends. I knew I was going to love this book from the opening chapters and the circumstances surrounding their first meeting and I don't think the smile left my face until I reached the end. I'm so pleased that we've still got the youngest McCade brother Logan's story to look forward to. His book is already at the top of my wish list and it doesn't even have a title yet!