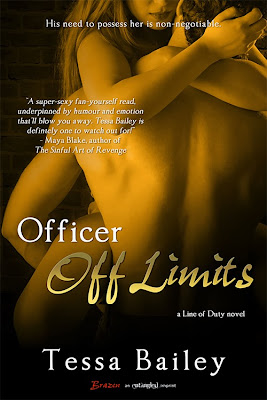 His need to possess her is non-negotiable.

Story Brooks’ fiancé just called off their wedding two weeks before the happy day. As if that isn't bad enough, her semi-estranged father, an infamous NYPD hostage negotiator, has suffered a heart attack. Not wanting to examine her lack of emotion over the broken engagement, she hops on a plane to reconnect with her father before it’s too late.

Playboy hostage negotiator Daniel Chase has never, not once, been refused by a woman, so when a debate over hospital snack foods with a delectable kindergarten teacher ends in flat-out rejection, he makes it his mission to seduce her. His only obstacle? She’s the daughter of his mentor who implicitly forbade Daniel from pursuing her.

Despite her father’s warnings and Daniel’s troubled past, Daniel and Story can’t resist their intense attraction to one another. But when the reason for her fiancé’s abrupt wedding cancellation comes to light, can Story and Daniel's already forbidden relationship survive?

Review:
Story isn't having the best week, she found out her fiancé had been cheating on her when he dumped her just two weeks before they were due to get married and now her father is in hospital after suffering a heart attack. She's never had the best relationship with her absentee father but she wants to make things right between them while she still has the chance, it also gives her a great excuse to get away from home for a while while she recovers from her broken heart. Daniel is immediately attracted to Story when he meets her at the hospital, he isn't used to being turned down by women so her knock back just makes him even more determined to date her. There is just one major problem with that - Story is the daughter of Daniel's mentor, the man who has been like a father to him, and that makes her completely off limits. Can Daniel resist temptation or is Story worth crossing the line for?

I enjoyed both of the previous books in Tessa Bailey's Line of Duty series so I was looking forward to reading Officer Off Limits and I have to say it's now my favourite book in the series. These books really do get better and better so I can't wait to get started on the next one Asking for Trouble! If you've read any of the previous stories you'll know that Tessa Bailey writes fantastic alpha heroes who all tend to have a penchant for talking dirty and I'm happy to tell you that Daniel is no different. I absolutely loved his conversations with Story, he is totally swoon worthy! He has a reputation as a womaniser but he's also a really nice guy and has a surprisingly sweet side to him. On the outside he oozes sex appeal and witty banter but underneath he is kind and a little vulnerable.

Story has been through a lot so she really isn't looking for a new relationship, she is incredibly attracted to Daniel though so is more than willing to indulge in a fling to help get over her ex. She isn't expecting to like Daniel as much as she does though so it is much harder to keep her emotions out of it than she thought it would be. I can't say I blame her because Daniel is pretty irresistible! Officer Off Limits is full of intense chemistry, dirty talk and plenty of sexy times, it also has humour, romance and a little action making it a fantastic read. If you're a fan of the series you're going to love this instalment and if you've not read anything by Tessa Bailey before but love dirty talking, intense alpha heroes then you want to grab a copy of this book ASAP!