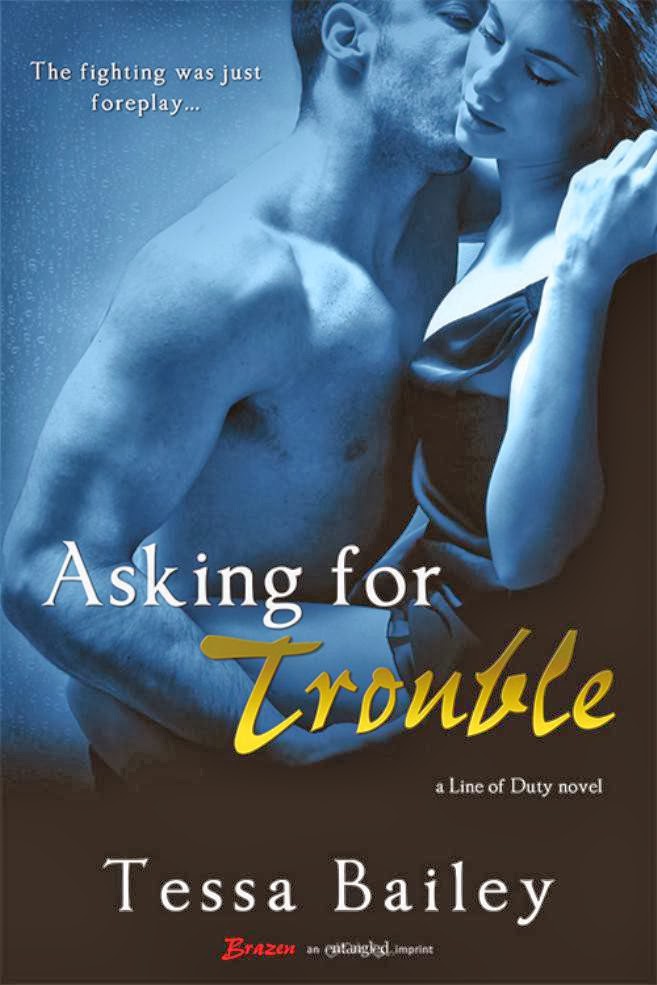 Brent Mason and Hayden Winstead can't stand each other. She plans exclusive parties for her rich familys charities. He's a rough and tumble cop who rigs explosives for a living. Could two people be any less suited for conversation? They think not and prefer to keep it that way.

Unfortunately, their two best friends are deeply, disgustingly in love. Forced together, the mutual attraction simmering beneath the surface of Brent and Hayden's non-relationship grows with every argument until it explodes into a scintillating night of mind-blowing sex. And it wont be the last, as far as Brent's concerned.

Hayden has a secret, though. Her father's company is relying on a merger to save them from financial ruin, and only Hayden's marriage to the CEOs wealthy son can secure the deal. If she's to protect her family, she'll have to forget Brent. And he has no intention of being forgotten.

Review:
Once again Tessa Bailey has written a fabulous romance and given me new favourite in the Line of Duty series. We had already met both Brent and Hayden in the previous book and having seen how much they love to hate each other I just knew that their chemistry would be off the charts! I'm glad I can say that I wasn't disappointed. In a lot of ways these characters are complete opposites but that is what makes them work so well together.

Hayden is a rich society daughter who seems to have it all, she spends her time planning parties to raise money for charity and it looks like she doesn't have a care in the world - that is what Brent thinks of her anyway. It doesn't take long for us to realise how much pressure she is under though, her mother has to be one of the most selfish characters I've come across in a while and I hated the way she treated Hayden and put pressure on her to marry a wealthy man who would invest in her father's failing business. From first glance you might think that Hayden is stuck up and has had everything handed to her but she actually works really hard at fundraising and she spends a lot of time volunteering with a charity that is very close to her heart. She has always dreamed of marrying for love but she feels that she owes it to her father to help him in his time of need.

Brent comes from a very different background to Hayden, his family has never had much money but he is a proud man who works two jobs to help support his siblings. He has a bit of a chip on his shoulder about the fact that Hayden seems to have it so easy, he resents what he thinks she is and it takes him a while to realise that his opinion about her was completely wrong. As much as the two of them always manage to rub each other up the wrong way neither of them can deny the attraction that burns between them and when they've given in to that attraction once they just can't seem to stop themselves from going back for more. I loved the push and pull between them as they fought over who was more dominant. Hayden likes to take control in the bedroom but really you can tell that Brent is the one who is in charge. He encourages her to let her wild side out though and just like all of Tessa Bailey's heroes he excels at scorching hot dirty talk! I think these two have some of the hottest scenes from the series and trust me that's saying something.

Asking for Trouble really was a fantastic instalment in the series and it's left me eager to get started on the final book Staking His Claim which is about Brent's younger sister Lucy and his best friend Matt. I have a feeling that big brother isn't going to be happy about this match and I can't wait to see the sparks fly!