I absolutely loved the first book in Felicity Heaton's Eternal Mates series (you can read my review of Kissed by a Dark Prince here) so I'm very excited to be taking part in the cover reveal for the second book, Claimed by a Demon King, today. 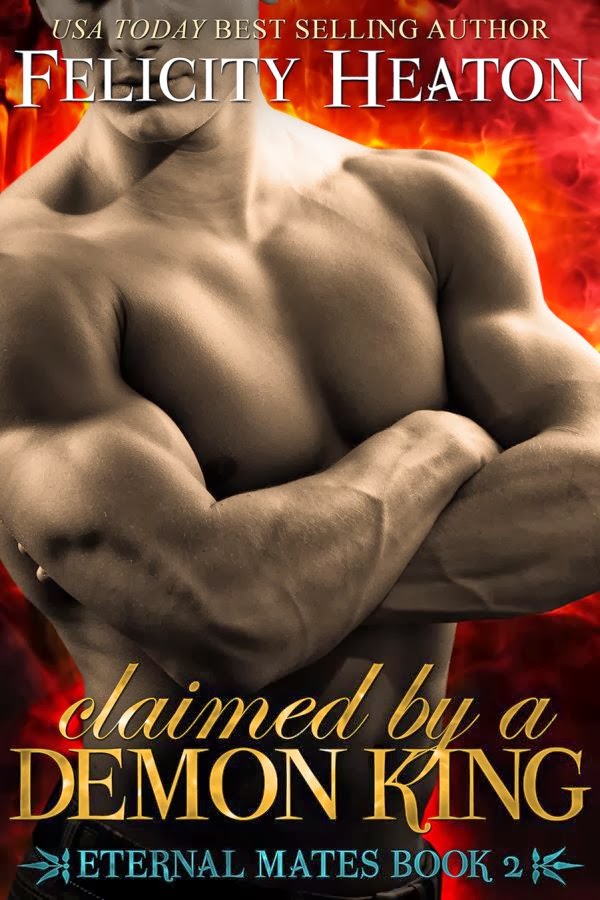 What do you think? Isn't it sexy! Now let's have a look at the blurb:

The moment the demon King Thorne of the Third Realm set eyes on the mortal huntress Sable, he knew she was his fated one. The fiery, dangerous female awakened hungers he had never experienced before, a dark craving and passion that has consumed him in their time apart. As the lunar cycle wanes, she enters his world again and nothing will stand in the way of him claiming his forever with her—not the relentless assault from the Fifth Realm or the dark elf male determined to seduce her out of his grasp.

Intent on achieving the coveted position of commander at Archangel, Sable leads her small team into the dark underworld and the Third Realm, to a war where her allies are the very creatures she normally hunts—vampires, werewolves, and demons. Her eagerness to lead the deadly mission has everything to do with winning her promotion, and nothing to do with the kingdom’s brash, lethally seductive demon king—a king who stirred fierce desire and wildfire heat in her with just a look and an innocent touch when they first met, and has been in her wicked dreams ever since.

As the gathering storm between rivals unleashes irresistible passion that flares white-hot and the heat of the battle brings life-shattering realisations, can Sable place her duty before her heart? Or will she surrender to her deepest desires and be claimed by a demon king?

Join Felicity’s mailing list to receive a notification when Claimed by a Demon King is released, plus a sneak preview of the first 6 chapters of the book and chances to win a signed copy: http://www.felicityheaton.co.uk/newsletter.php

Add the book to your Goodreads shelf at: https://www.goodreads.com/book/show/18741572-claimed-by-a-demon-king

Books in the Eternal Mates paranormal romance series:
Book 1: Kissed by a Dark Prince
Book 2: Claimed by a Demon King

If you're a fan of paranormal romance authors Lara Adrian, J R Ward, Sherrilyn Kenyon, Gena Showalter, Larissa Ione and Christine Feehan then you will enjoy her books too.

In 2011, five of her six paranormal romance books received Top Pick awards from Night Owl Reviews, Forbidden Blood was nominated as Best PNR Vampire Romance 2011 at The Romance Reviews, and many of her releases received five star reviews from numerous websites. In 2013, Heart of Darkness was a finalist in the paranormal romance category at the Epic Ebook Awards, and she became a USA Today best-selling author.