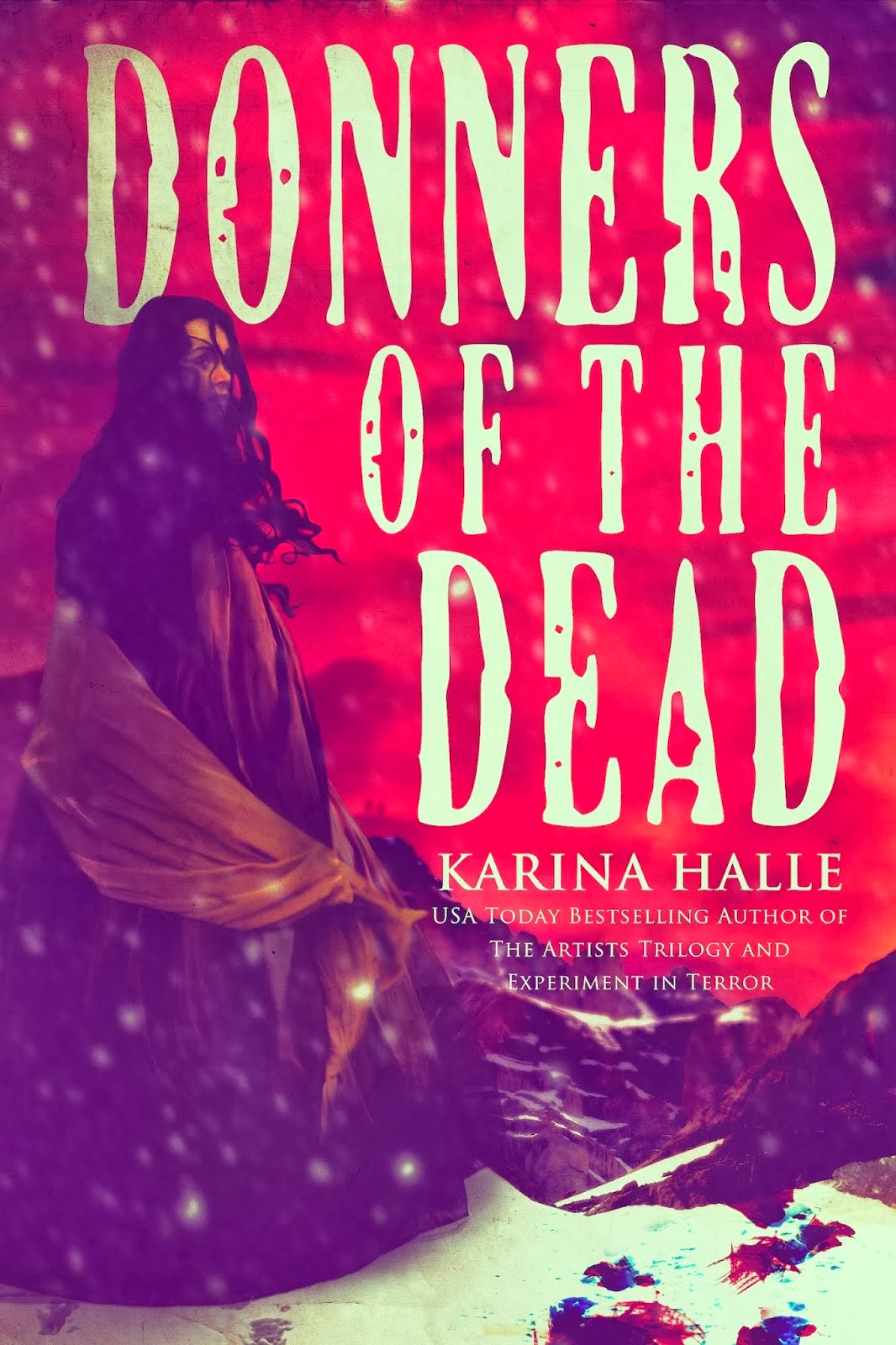 A note about this book: Donners of the Dead is set in 1851 – couples were often thrust into marriage together with short courtships, racism was widespread and not overly frowned upon, and women had little to no rights. What wouldn't fly in today's day and age was unfortunately the norm back then - it is worth keeping that in mind when reading this book.

Jake McGraw was unlike anyone I’d ever known. He was brash, rude, unapologetic and arrogant; chauvinistic, close-minded, and terribly stubborn. He was built like a tree, tall with a hard chest and wide shoulders and hands that looked like they could wrestle a bear. He was a cigar-chomping, scruffy-faced, beast of a man. I was pretty sure I hated him. And I know he hated me. But among the flesh-eating monsters in these snow-capped mountains, he was the only thing keeping me alive.

The year is 1851 and pioneers in search of California gold are still afraid to travel on the same route as the tragic Donner party did years before. When the last wagon train to go into the Sierra Nevada mountains fails to arrive at their destination, Eve Smith, an 18-year old half-native girl with immense tracking skills is brought along with the search party, headed by an enigmatic former Texas Ranger, Jake McGraw.

What they find deep in the dangerous snow-covered terrain is a terrifying consequence of cannibalism, giving new meaning to the term “monster.” While the search party is slowly picked off, one by one, Eve must learn to trust Jake, who harbors more than a few secrets of his own, in order to survive and prevent the monstrosities from reaching civilization.

Review:
I have to confess I don't read much horror these days so I was a bit nervous before I picked up Donners of the Dead in case I didn't like it. I'm a huge fan of Karina Halle's Artists trilogy though and I've even been enjoying her Experiment in Terror series so I figured if anyone could get me to enjoy a horror romance then it would be her. As it turns out I actually loved how scary it was! I think this was even more creepy than the EIT books (although I've only read the first 2 books so far and I have heard they get scarier as the series continues) and it's definitely more gory. Karina Halle is actually managing to get me to enjoy horror again so I have to give her extra kudos for that.

I think the thing that intrigued me most about this novel and that really made me want to read it was the setting. As a Brit there is a lot I don't know about American history but hearing that this is loosely based on the true story of the Donner Party had me itching to learn more, in fact I'm going to have to do a little research on that group now I've finished the book! I haven't read many stories set in this era so it was a refreshing change to read something so different. I actually think that's something Karina Halle is really good at, she always comes up with such unusual story ideas so you know going in you'll get something other than the norm when you pick up one of her books.

Eve is a young mixed race girl in an era where racism is highly prevalent and since the disappearance of her Native American father she has lived her mother's very white family. She is definitely seen as a second class citizen by her family members and is treated only slightly better than a slave by her uncle and aunt. When a group of men come through town looking for a tracker to help them on their expedition into the mountains Eve's uncle is more than happy to volunteer her for the job - especially when he finds out how much they will pay for her skills. Eve is reluctant to go but doesn't really have much of a choice in the matter and at least her close friend Avery will be going along with her and she'll have a local village girl as a chaperone. What was supposed to be a relatively simple expedition to find the missing Donner Party turns much more sinister when they find themselves being attacked but just who, or what, is coming after them?

I really liked Eve as a character and thought she came across as very realistic for her age and the era she was born in. She is a very innocent and naive young woman who has led a sheltered life and isn't used to being around a group of rough and ready men. It didn't surprise me too much that she developed an immediate fascination with Jake, the way he was described made him come across as ruggedly handsome and he certainly had physical appeal. Unfortunately he also acted like an ass, he comes across as incredibly racist and seems to take great pleasure in making nasty comments to Eve. Again I'd have to say his actions felt quite realistic considering the era and his background, I'm not trying to excuse his actions but I didn't feel they were out of character for a man of his experiences. What I didn't like was the way Eve was still drawn to him even when he was being so mean to her. I had a bit of an issue with how quickly they went from him constantly needling her to him suddenly flirting and attempting to kiss her. It had been obvious from very early on that she was drawn to him (even when I was struggling to see why!) but I hadn't felt that the attraction went both ways which kind of spoilt the romance for me, especially in the beginning.

Once Jake had a change of heart and started treating Eve nicer I actually really started to like him and he has some incredibly sweet lines that I'll happily admit made me swoon a bit. From the start of their flirting together the romance moves at a nice pace and I didn't feel it took away from the rest of the plot but it did seem to come a little out of nowhere in the beginning. I guess I wanted him to be a little more apologetic for the way he had treated her and to have seen him try to make amends for being so mean - I wanted Eve to expect more from him and for him to give it to her. I understand things have to move a little faster in a stand alone story though and I enjoyed their banter and flirting so much that I ended up forgiving him for his initial attitude.

Donners of the Dead was a really enjoyable story which I thought had the perfect mix of scary horror and sexy romance. Considering I'm not much of a horror fan I'm still surprised at how much I loved the creepy scenes even when they had me wanting to hide behind a cushion in fear! I loved the historical setting too and it's definitely left me in the mood to read more stories about American pioneers.