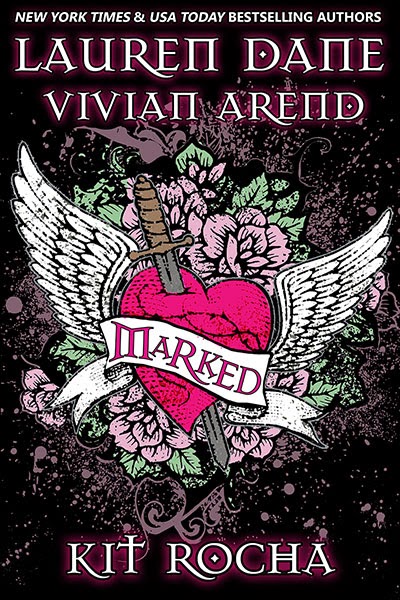 New York Times and USA Today Bestselling author Lauren Dane takes you into a brand new world in ALL THAT REMAINS. Summer Killian falls fast and hard when Charlie arrives in Paradise Village. But the heat turns all the way up when she learns Charlie is also with Hatch – the man she loved four years before. While she’s not sure she’s cut out for a triad, neither man is going to give her up.

Take a ROCKY RIDE with New York Times and USA Today Bestselling author Vivian Arend as she leads you back to the Six Pack Ranch. Anna Coleman might be the law around Rocky Mountain House, but bad boy Mitch Thompson knows that under the stiff RCMP uniform is a woman with a passion for speed and pleasure that matches his own, and he’s not giving up until she’s his.

Kit Rocha returns to Sector Four in BEYOND TEMPTATION. A promise to a dying friend backfires when Noah Lennox finds that the girl he was supposed to rescue is all grown up–and wearing O’Kane ink. He wants to protect her from the secrets of their past, but she wants him. And an O’Kane woman always gets what she wants.

For more information about any of these authors you can visit their websites by clicking the links below:
Lauren Dane
Vivian Arend
Kit Rocha

Review:
I'm going to confess that Beyond Temptation was the whole reason I wanted to read the Marked anthology, I absolutely adore the Beyond series and am completely addicted to these sexy O'Kanes and the world that Kit Rocha has created! So it'll be no surprise when I tell you that this was my favourite story in the anthology, probably because I'm already so invested in this world and it's characters. We have briefly met Noah before but since he's not an official O'Kane we've not spent much time with him and I was looking forward to getting to know him better. Emma is a character I already liked, one of the bartenders at the Broken Circle she's been a familiar face throughout the series so it was good to learn more about her background and I absolutely loved the scenes with her working alongside Ace as an apprentice tattoo artist.

Noah was best friends with Emma's brother and as such he has always considered her off limits, that doesn't mean he hasn't done his best to protect her though. In fact he paid a fortune to have her sent safely to the communes outside of the sectors and has spent the last few years believing that she has been living a dream life on a farm somewhere. When he finds out that she has been right under his nose the whole time and living with the O'Kanes he just has to check up on her and make sure that she's OK. The Emma he finds is very different to the sweet young girl he knew though, she's all grown up and has turned into a confident, sexy woman who knows what she wants and exactly how to get it. Emma always had feelings for Noah so when she sees him for the first time in years she sets out to seduce him and show him just how good they could be together.

I loved both of these characters, they have off the charts chemistry and a connection that runs much deeper than lust. There are some difficult secrets between them though, things that could end their relationship for good if they don't find a way to work through them. This was probably the tamest story in the Beyond series so far but don't take that to mean that it isn't sexy because Noah and Emma are hot as hell. Just as you'd expect from these stories there is plenty of dirty talk and hot action! We get a glimpse of some of the previous characters but most importantly we get to spend time with Ace and this has just got me even more excited about his book Beyond Jealousy which is up next. This is a series that always jumps straight to the top of my to read pile and I can't recommend it highly enough although I would personally recommend reading the books in order starting with Beyond Shame though.

Thompson & Sons Series:
Rocky Ride (Novella in the Marked anthology, also available as a separate ebook)
Baby, Be Mine
One Sexy Ride
Let it Ride
A Wild Ride

Review:
Rocky Ride is the first story in Vivian Arend's new Thompson & Sons series which is a spin off from her Six Pack Ranch books. I haven't actually read any of the Six Pack Ranch books (I'm going to have to pick them up since I enjoyed this one so much though!) so although I believe both Mitch and Anna have made previous appearances I didn't have a problem reading their story as a stand alone. This was certainly a hot read and I'm definitely planning on reading the sequel, Baby Be Mine, soon.

In a lot of ways Mitch and Anna are complete opposites, Mitch is a mechanic at his family's garage who has a bit of a bad boy reputation while Anna is a police officer who loves her job more than anything. As it turns out Mitch doesn't really deserve his reputation, he may have tattoos and ride a motorbike but apart from a couple of pranks as a teenager he hasn't got into any trouble for years and is a hard working and genuine guy. The couple have been meeting up for a few months for incredibly hot sex but while Mitch wants more Anna is running scared. She worries about how Mitch's reputation could affect her career and she is scared of getting hurt by risking her heart.

I absolutely loved this couple, they are so perfect for each other and I really enjoyed seeing how Mitch convinces Anna to give him a chance. They have fabulous chemistry and are both quite creative when it comes to playing out their fantasies which makes things very interesting. This is definitely a new series to watch out for and one I'm looking forward to continuing.


All That Remains - Lauren Dane

Metamorphosis Series:
All That Remains (Novella in the Marked anthology)
All the Little Pieces (Release date to be confirmed)

Review:
All That Remains is set in a futuristic dystopian world where a lot of the population has been wiped out and there are now way more men than women. People tend to live in small communities where they have a barter system in place to trade for the things they need and it is very common to find relationships with three (or sometimes more) members. I'm interested in the world that Lauren Dane has created but I have to admit that I wanted more information than we were given. It's very hard to introduce a whole new world in a fairly short novella so I was left with a lot of questions about why society fell apart in the first place but I was given just enough to hook me and make me want to carry on reading.

Summer knows what she is looking for from a relationship and she is prepared to wait until the right man (or men) comes along rather than settle for second best. She has a high sex drive and isn't embarrassed to take what she wants and needs. Hutch and Charlie have been together for a couple of years and have spent that time travelling around the country, they have enjoyed getting to see the world but are ready to settle down and find a place to call home. They would also love to add a woman to their lives and their bed. Charlie is the one who spots Summer first, there is something about her that draws him in and it seems the attraction is returned but there is a slight stumbling block when it comes to Hutch. Summer and Hutch grew up together and he was her first love so she was devastated when he left her to go and see the world. She has never forgiven him for breaking her heart so although Hutch would love to rekindle their relationship Summer is wary of getting hurt again.

It can be hard to sell me on a permanent triad relationship but in this case I thought Summer, Hutch and Charlie worked really well together. I loved the fact that they all spend time together separately as well as in a threesome and I actually believed that all three of them had feelings for each other. Things to happen fairly quickly but I still found it believable and enjoyed seeing them work things through. Summer is understandable wary of Hutch and scared of getting hurt again so I liked the fact that she made him work at proving himself, he knows he made a mistake by not searching her out sooner and he owns that and apologises for it. The two of them have quite a fiery relationship and Charlie is often the voice of reason and the one who steps in to calm things down between them. All three of them have developed a strong friendship and was left thinking that they could make a success of things. I really liked Summer's sister and I'm hoping that we might get her story later on in the series, she definitely deserves some happiness after everything she has been through and it would also give us a chance to see how Summer, Hutch and Charlie are getting on in the future. I'm a little disappointed to learn that the next story is going to be released as a serial novel (I'm really not enjoying this trend!) so I'll probably wait until all of the instalments are available before I start reading it but I'd definitely like to carry on with this series.