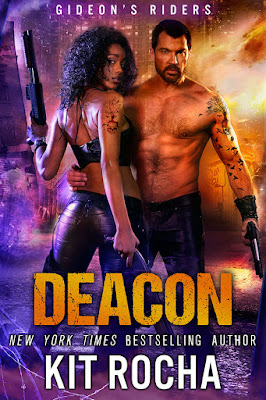 Ana has trained most of her life to achieve one goal: to prove that anything men can do, she can do better. Now she’s Sector One’s first female Rider, and being the best is the only way to ensure she won’t be its last. Distractions aren’t allowed–especially not her painful attraction to the reserved but demanding leader whose stern, grumpy demeanor has already gotten into her head.

Deacon has spent the last twenty years trying to atone for his past, but the blood he spilled as a mercenary and assassin will never wash away entirely. If his Riders knew the extent of his sins, he’d lose their trust and respect. It’s easier to keep them all at arm’s length, especially Ana. But his newest recruit’s stubbornness is starting to crack his defenses.

And their sparring matches are driving him wild.

The passion sparking between them can’t be denied, but neither can the vengeance barreling toward Deacon. When his old squad comes back to punish him for his betrayal, Ana and the Riders are squarely in the line of fire. The only way to save his people may be to make the ultimate sacrifice.

But first, he has to convince Ana not to follow him straight into hell.

Review:
Deacon is one of the few remaining original members of the Riders and he's also their trusted leader but he's been keeping a huge secret about his background and that past is now about to come back and bite him. Ever since becoming the leader Deacon has held himself at a distance from the others, partly because it hurts him to send them into battle knowing that they may never make it home but partly because he worries about what they'll think if they discover his secrets. When it becomes clear that his past has now put everyone he cares for in danger Deacon immediately steps up to sacrifice himself for the greater good but what he doesn't realise is how much the Riders care about him and that they'll never let him walk into a bad situation alone.

Ana is the first, and so far only, female Rider and that puts her under a lot of pressure. Her father was one of the founding members and he pretty much trained her for birth to join him, she always dreamed of being a Rider and after her father's death it became even more important as a way to honour his memory. A skilled fighter and fiercely intelligent Ana is a worthy member of the group but she always feels like she's being scrutinised and measured up against the guys, especially when she realises that she has become a role model to young girls in the sector who have dreams of joining the Riders and being just like her. Ana has always had feelings for Deacon but she hates the idea of people thinking the only reason she's a Rider is because she was sleeping with the boss so she's never acted on them. Then when she realises the danger they are all in she starts to realise that some things are worth fighting for.

I absolutely loved Deacon and Ana as a couple, they have a few issues to work through but in the grand scheme of things there is no major unnecessary relationship drama to keep them apart. They have fantastic chemistry and are both pretty good at talking things through but Ana does have a tendency to drive Deacon insane by refusing to blindly follow his orders when she knows he is making stupid choices. There aren't many that can stand up to Deacon and sometimes he needs someone who will question his decisions. The main tension in this story comes from outside sources, I'm not going to say much about that just that you can expect a lot of fighting, guns and explosions so there is lots of edge of your seat action, particularly in the second half!

We've met the Riders before of course but this book really gives us a chance to start connecting with them as individuals and as a group. Gideon's Riders may have totally different beliefs to the O'Kanes but the bond between members of their group is just as strong. The Riders promise to give their lives for Gideon and Sector One when they sign up, they even give up the chance of having a family of their own, and that has made them a little fatalistic because they don't have anything at home worth fighting to come home to. Even Gideon is starting to see the error in this, it's not that the Rider's won't have to sometimes risk their lives, and they might even die in battle one day, but they need to find a balance so that they actually live their lives to the fullest while they can. I think it's going to be really interesting to see how the group dynamics start changing as they begin learning how to live as well as to fight.

This series is turning out to be just as fantastic as the Beyond one and I can't wait to get my hands on the next instalment. I have a great feeling about Ivan already and it's going to be a lot of fun watching how Gideon reacts when he realises who the man has fallen for!