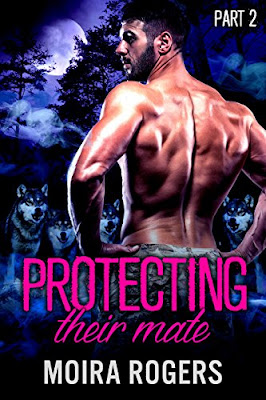 As Ashley settles in to her life at the lodge, she meets more of her new pack mates--including wicked, intense Jud. His touch arouses her hunger--and Blake's possessiveness. Lucas, the unyielding alpha, grows concerned with the attachment between Blake and Ashley and sends Blake out on a mission.

While Blake is away, Ashley meets the most elusive member of her new pack--the enigmatic Connor, a hacker who, like her, was raised among humans. For Connor, sex is volatile--dangerous--and being near Ashley draws out the feral edge of the wolf inside him. As Ashley's connection with Blake--and with Lucas--grows deeper, an outside force threatens the peace of the Last River pack.

Review:
This is part two of Moira Roger's Protecting Their Mate serial and I wouldn't recommend reading it as a stand alone so make sure you've read part one first. If you're looking for a hot new series to try then I'd definitely recommend this though. You may have read these author's books under their other pen name, Kit Rocha, in which case you'll already have a good idea how spicy this is going to be. Imagine the O'Kanes were werewolves and you should have a pretty good idea where it's going!

This continues Ashley's story now that she has been rescued by Blake and taken back to the home of his pack. Blake is already head over heels for Ashley but he knows it's her wolf who will decide who her mate is and he's convinced that her wolf will pick the pack alpha Lucas because he's the strongest but that doesn't mean he won't fight to claim her for himself. Lucas worries that Blake has become too attached since Ashley hasn't made a decision yet so he sends him away from their base on a mission which leaves her with Connor and Mac when the mating fever takes hold.

I'm having a hard time now choosing which of these wolves I like the most, they all have different charms and as much as I'm rooting for Ashley and Blake to end up together I'm already really looking forward to Connor and Mac's story. I'm pretty confident that they'll end up in a triad relationship with some lucky female wolf and I can't wait to see who it is that wins their heart! I hope we get a book for each of the wolves though because I definitely want to see more of Jud and Lucas too.

This serial has a heavy focus on the steamy times and it definitely falls on the more erotic side of paranormal romance but I'm enjoying every minute of it. There is still a plot going on in the background though and now that Lucas and the others are arranging to meet with another pack I think things are going to get even more interesting. I'm looking forward to reading the end of Ashley and Blake's story (I refuse to consider she'll end up with anyone else!) and I'm definitely hoping that Donna and Bree (the writing team behind Moira Rogers and Kit Rocha) are planning more books set in this world.