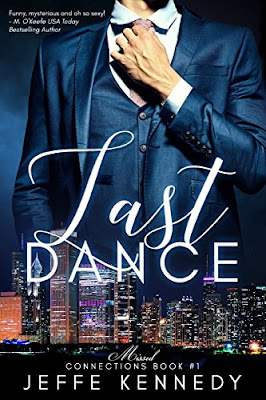 It was five minutes. His hand on the small of her back. His eyes watching like there was no one else in the crowded club. His body a breath away from hers. A kiss full of heat and need and promise.

But then the stranger disappears. And Charlotte Emory can’t forget him. Worse, according to the dating Rules she and her four best friends swear by, all she can do is post an ad online. No names, no numbers. Just a missed connection – and the hope he’ll meet her, and see where another dance leads.

Except Mr. Mystery has his game, too, and he isn’t playing for only one night. He tempts Charley into a daring exploration of power, lust, and suspense, where even the most innocent requests sound indecent…and the indecent ones make her burn all night.

If she plays by the Rules, they’ll never get past teasing each other. But rules were made to be broken…

Review:
The Missed Connections series is about a group of 5 single friends and the rules they've created to stop themselves making drunken dating mistakes. There are strict rules about how much intimacy is allowed on each encounter with a guy and the friends all keep an eye on each other to make sure the rules aren't broken. I really enjoyed the friendship between these women and the way they always looked out for each other, in too many romance novels other women are only included as potential love rivals so anything stories with strong female bonds automatically make me happy. The way they banter and have fun together reminded me a lot of the TV series Sex in the City and that's definitely not a negative.

Charley is an aspiring actress who loves to be the centre of attention, she loves the thrill of the chase and enjoys sex but once she's caught a guy's attention she looses interest quickly. I actually found her a little selfish but I liked that she owned her sexuality and wasn't ashamed of her desires. Mr Mystery catches her attention when they share a dance at a club but then he vanishes in the crowd leaving her wanting more. Charley isn't used to being the one who does the pursuing, it's normally the other way around, so that immediately captures her attention. Her mystery guy never does what she expects him to but that's the best way to keep her interested so it works in his favour.

If I'm honest I didn't manage to fall for Mr Mystery, it took far too long for us to get to know much about him so it was hard to connect to him as a person. Then his secret was revealed and I was irritated by the way he had been playing with Charley. I'd probably have forgiven him eventually (and to be fair, if he hadn't played the games he had then Charley would have lost interest the moment they'd had sex so I understood why he did it) but things happened a bit too fast and it stopped me becoming fully invested in them as a couple.

I'm still curious about the other girls though so I'm looking forward to reading their stories and hopefully I'll enjoy them even more than this one.