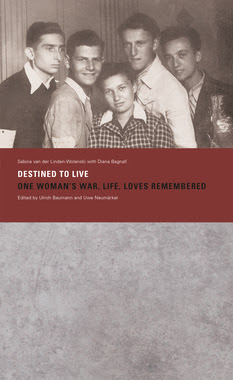 Sabina van der Linden-Wolanski (1927-2011) was the only member of her family to survive the Holocaust in eastern Poland. After the war, she spent time in Silesia (now part of Poland) and Paris before emigrating to Australia in 1950. A diary and a few photographs were all she had left to remind her of her youth. Decades later, these unique items became part of the exhibition in the Information Centre of the Holocaust Memorial. Sabina gave a speech as a guest of honour at the inauguration on 10 May 2005. Her autobiography is a testament to the determination and the uncertainties of a young girl facing violence and murder, but also to the strength of character that enabled Sabina to make a new start on the other side of the world as a wife, mother and businesswoman.

This edition is available to purchase from The Foundation Memorial to the Murdered Jews of Europe in Berlin.

Review:
If you follow my blog then you'll already know that I don't read or review much non fiction, especially not memoirs, but we read about some of Sabina Wolanski's story at the Memorial to the Murdered Jews of Europe in Berlin and when we found out they had an English copy of her memoir for sale we immediately bought a copy. Sabina actually gave a speech at the opening of the memorial and we heard a recording of part of that speech while touring the museum and I found her words were both poignant and deeply meaningful considering the rise of prejudice and hatred that just seems to be building in the west over the last few years.

This book isn't an easy read, it took me a long time to read because I kept getting so emotional and had to take a break and walk away. I cried buckets of tears while reading and I'm welling up again now as I write this review, but don't let that put you off picking up a copy because it's such an important story.

Sabina was just 12 years old when Nazis invaded her hometown of Boryslaw (at the time part of Poland but now within Ukraine boarders) and her world was turned upside down. She talks unflinchingly about the aktions she witnessed, the way people were rounded up and sent to death camps to be gassed like her mother or just shot in the head like her father and brother. She talks about her fears and how as a child she just couldn't understand the way she was suddenly no longer able to attend school or play with her non Jewish friends, she goes into detail about life in the ghettos created to house Jewish people and about her time spent hiding in underground shelters or people's basements trying to avoid detection.

Out of all the countries in Europe Poland suffered the largest losses of Jewish life under Hitler's regime, out of 3.5 million Jews before the war 3 million people were murdered. From a Jewish population of 15,000 in and around Boryslaw Sabina was one of an estimated 800 survivors. Those kind of numbers are just so hard to comprehend, it's a tragedy on a scale that I can't wrap my head around it but that's why books like this one are so incredibly important. Sabina puts a human face to just one of those stories while so many more have been forgotten and will never be told. This book should be required reading for everyone and if you ever go to Berlin then the Memorial to the Murdered Jews of Europe is also a must visit.

This isn't only about Sabina's live during the war though, it's also about her life after she escapes Europe and emigrates to Australia. You can see the way the events she witness shaped her whole life but she fought against all odds to survive and even travelled back to Germany to be a witness at the trial of the man who ordered the murders of her father and brother. Sabina's story is one of survival against the darkest odds, it's about the people who were willing to risk their lives to help her along the way and it's about good triumphing over evil. The most important message is that we must never forget this tragedy and we must never allow it to happen again.