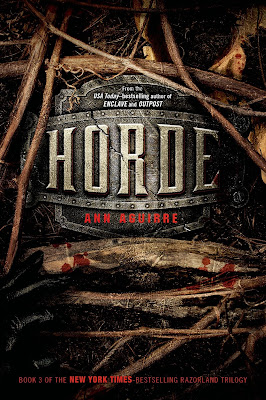 The horde is coming.

Salvation is surrounded, monsters at the gates, and this time, they're not going away. When Deuce, Fade, Stalker, and Tegan set out, the odds are against them. But the odds have been stacked against Deuce from the moment she was born. She might not be a Huntress anymore, but she doesn't run. With her knives in hand and her companions at her side, she will not falter, whether fighting for her life or Fade's love.

Ahead, the battle of a lifetime awaits. Freaks are everywhere, attacking settlements, setting up scouts, perimeters, and patrols. There hasn't been a war like this in centuries, and humans have forgotten how to stand and fight. Unless Deuce can lead them.

This time, however, more than the fate of a single enclave or outpost hangs in the balance. This time, Deuce carries the banner for the survival of all humanity.

Review:
With the Horde camped all around Salvation and everyone Deuce has come to care about once again in danger she has set out with Fade, Tegan and Stalker to try and get help from the nearest settlements. The number of Freaks they're up against leave them facing almost impossible odds but Deuce and her friends are determined and as they gradually gain the respect of other settlements their army starts to grow. They're going to need a miracle if they have any chance of winning though and the assistance they badly need comes from a very unexpected quarter.

This book was fantastic, it's fast paced, full of action and pretty bloody and brutal. I think it's probably the darkest book in the series but there were moments of lightness that stopped it being too dark. I love that Ann Aguirre doesn't try to sugarcoat things though, this is a war, the stakes are high and every victory they have is going to cost them. Sometimes the price is almost too much to bear but giving in isn't an option so Deuce just has to find a way to keep pushing on. She's come such a long way since the first book and now she's such a wonderful young woman, she's not perfect and she makes mistakes but she has the heart of a lion and she is determined to make a positive difference with her life. The relationship between her and Fade has been great, they've been through so much together and Fade is in a bad place at the start of this book but Deuce never gives up on him and they fight to find their way back to each other.

Horde had some brilliant twists to it and there were a few shock moments that I definitely wasn't expecting. In fact one thing upset me far more than I would have expected it to. We're introduced to some great new characters along the way and there are a few familiar faces from Deuce's past that I was really happy to see. It was interesting to see how each different settlement lived and how they went about protecting themselves in this new world. Travel between the settlements was treacherous so each group had to be pretty self sufficient but some of the towns and villages they came across were more dangerous than others.

I know Horde was originally meant to be the final book in this trilogy and as such it's actually a pretty great ending that ties up all the major threads that have been running through the series. I'm glad that Ann Aguirre decided to give fans another story set in this world though, I love Tegan and am looking forward to spending more time with her but more than anything I'm curious to see how the world goes about rebuilding after the major battle in this book.