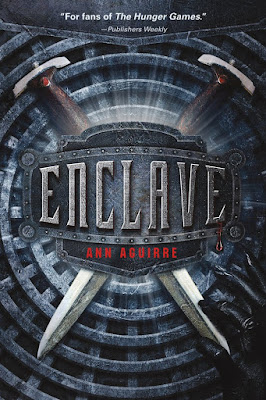 New York City has been decimated by war and plague, and most of civilization has migrated to underground enclaves, where life expectancy is no more than the early 20's. When Deuce turns 15, she takes on her role as a Huntress, and is paired with Fade, a teenage Hunter who lived Topside as a young boy. When she and Fade discover that the neighboring enclave has been decimated by the tunnel monsters--or Freaks--who seem to be growing more organized, the elders refuse to listen to warnings. And when Deuce and Fade are exiled from the enclave, the girl born in darkness must survive in daylight--guided by Fade's long-ago memories--in the ruins of a city whose population has dwindled to a few dangerous gangs.

Ann Aguirre's thrilling young adult novel is the story of two young people in an apocalyptic world--facing dangers, and feelings, unlike any they've ever known.

Review:
I've had Enclave on my to read pile for a very long time but to be honest I'd got a bit burned out on YA dystopians so I never got around to reading it. After meeting Ann Aguirre recently and talking to other fans who absolutely love the series (I'm looking at you Carien!) I decided it was finally time to give it a try though and I'm really glad I did. Enclave is set after some kind of disaster has ended life as we know it now, humans are scattered and forced to live in small underground communities. Life is hard, most children don't survive until adulthood so they're not even given names until they're old enough to fend for themselves, and even then life expectancy is much lower than what we're used to.

Deuce has just turned 15 and been given her name, she has been accepted as one of her enclave's hunters which means she will be sent out daily in search of food and other precious items to help their group survive. She has been paired with Fade, an older boy who is a great fighter but who isn't trusted by the rest of their clan because he wasn't born there. Fade arrived as a young child having navigated the underground tunnels completely alone, he claims he was born above ground but nobody believes him because they have never been able to leave the underground themselves. Deuce has always believed everything that the elders have told her and been happy to follow orders but with Fade's help she starts to discover that not everything within their community is quite what she thought it was and perhaps the elders don't always know the right thing to do.

Ann Aguirre did a brilliant job of describing the dark, dank underground world Deuce has been raised in. The atmosphere of the book is gloomy and oppressive and almost makes you feel suffocated while you're reading it. Deuce and Fade are both brilliant characters too, Deuce is fierce and a fighter but initially she's very naive and willingly follows orders without thinking things through. Fade has seen the world outside of the enclave so he's more willing to see the truth behind the lies and he's less scared of walking away and leaving the enclave behind him. I loved seeing the way Deuce's opinion of Fade changed as she started to really question what was happening around her and when Deuce is forced to leave she goes on an even steeper learning curve. She's always been capable of fighting but she has very few survival skills away from her home and she's never even seen the sky before so she's totally out of her comfort zone.

This world is brutal and I was glad that the author didn't try to sugarcoat things, there are gangs who will do whatever it takes to survive and who think nothing of murdering others to protect their territory. I didn't like the way those gangs considered girls just breeders who were there to be used and abused but sadly it wasn't hard to believe that people were capable of treating women like that. If there is one thing I really didn't like about the story it was the addition of Stalker as one of the main characters, he was the leader of one of these gangs and we heard first hand from one of his victims how he allowed his men to rape and abuse her (she'd given birth several times so this was something that had been going on for years!). I get that Fade and Deuce felt they needed another fighter on their side and after the way they were thrown together he was their only option but I didn't like the way Deuce began to trust him and that she started to try and justify his previous actions. I don't care what excuses you come up with you will never sell me on Stalker being a good guy and I felt bad for Tegan that she was forced to live in close confines with one of her abusers.

I was disappointed that Stalker seemed to come between Deuce and Fade's relationship for a while there and I know some people are worried that this was the start of a dreaded love triangle but I'm staying hopeful that it won't happen. I have faith that Ann Aguirre won't do that to us but if she does try to turn Stalker into a love interest then I'll be upfront now and say that I'll probably rage quit the series. I really hope it doesn't come to that though because I love both Deuce and Fade and really want to follow the rest of their journey!