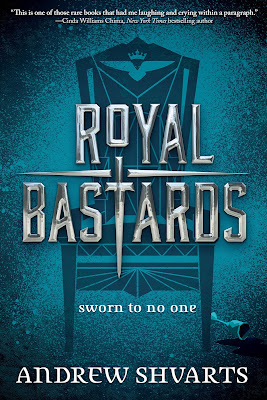 Being a bastard blows. Tilla would know. Her father, Lord Kent of the Western Province, loved her as a child, but cast her aside as soon as he had trueborn children.

At sixteen, Tilla spends her days exploring long-forgotten tunnels beneath the castle with her stablehand half brother, Jax, and her nights drinking with the servants, passing out on Jax’s floor while her castle bedroom collects dust. Tilla secretly longs to sit by her father’s side, resplendent in a sparkling gown, enjoying feasts with the rest of the family. Instead, she sits with the other bastards, like Miles of House Hampstedt, an awkward scholar who’s been in love with Tilla since they were children.

Then, at a feast honoring the visiting princess Lyriana, the royal shocks everyone by choosing to sit at the Bastards’ Table. Before she knows it, Tilla is leading the sheltered princess on a late-night escapade. Along with Jax, Miles, and fellow bastard Zell, a Zitochi warrior from the north, they stumble upon a crime they were never meant to witness.

Rebellion is brewing in the west, and a brutal coup leaves Lyriana’s uncle, the Royal Archmagus, dead—with Lyriana next on the list. The group flees for their lives, relentlessly pursued by murderous mercenaries; their own parents have put a price on their heads to prevent the king and his powerful Royal Mages from discovering their treachery.

The bastards band together, realizing they alone have the power to prevent a civil war that will tear their kingdom apart—if they can warn the king in time. And if they can survive the journey . . .

Review:
As the oldest daughter of Lord Kent Tilla should be the heir to the Western Province and treated like a princess. Unfortunately for her she's a bastard and although her father doted on her as a child he has completely ignored her since his legitimate children were came along. Tilla spends most of her time with her half-brother (on her mother's side) Jax, exploring the old tunnels underneath the castle and getting in trouble with the other servants but she secretly longs for her father to make her his official heir so that she could claim her place at his side.

Even though she's the bastard child and basically a spare part she still has to attend official functions but she's relegated to the bastards table along with her childhood friend Miles who is the bastard son of another wealthy family in the province. When a they receive a visit from members of the Royal family everyone is shocked when Princess Lyriana chooses to join Tilla, Miles and Zell (the son of a visiting Zitochi warrior) at the bastard table. Lyriana has never had much freedom and she challenges the others to take her on an adventure but things turn sour when they witness a shocking crime and suddenly find all of their lives are in danger. Their only hope of survival is making it across the kingdom to reunite with Lyriana's family and if they fail the entire country could be facing a bitter civil war.

I had so much fun reading this book, Andrew Shvarts swiftly swept me into his world and he made it incredibly easy for me to feel really invested in his characters. He's one of those authors who isn't afraid to put his characters into some pretty dark situations though so you'll find yourself constantly worrying about wether they'll all be alive by the end of the book. The story is action packed from very early on and it definitely had me on the edge of my seat when I was reading. Although it can be quite dark in places the humorous banter between the main characters added just the right amount of fun to offset it and this was a thoroughly enjoyable read.

I love Tilla, she's such a wonderfully written character who can be both insecure because of the way her father treats her but also incredibly happy when she's with her brother, she wants to learn to protect herself and she puts the effort in to train with Zell until she's quite badass but at the same time she still worries about the silly things that teenage girls worry about. She's just such a normal girl and she relies on all of the other misfits as much as they rely on her. One of my favourite things about the book was the brilliant relationship she had with her brother Jax, the two teased each other mercilessly but at the same time they were always there for each other and they had an incredibly strong bond. Jax was actually one of my favourite characters, he was just such a fun guy who was a bit of a ladies man and enjoyed winding up all of the others.

Zell was the most mysterious of them all, raised as a warrior by the Zitochi tribe he was from a very different background to the others but he was a brilliant ninja warrior who was very handy to have around when they were in trouble and I really enjoyed the way he slowly opened up to Tilla and the others. Miles was the nerd of the group, someone who was really intelligent but not so great at the physical stuff and who has been crushing on Tilla since they were children. I loved that fairly early on he got to prove himself by helping save Tilla when they were under attack, it was nice to see that the bookworm got to save the day over Jax and Zell who were both far better fighters. I had my doubts about Lyriana when she was first introduced, she's been so sheltered that she's fairly naive about the world around her and I worried that she'd end up being a bit useless but she has a lot of hidden depths that made her much more interesting.

I could rave about this book for hours because there is just so much to love about it - the fact I stayed up until 3:30am to finish it probably says it all really! The story is full of shocking twists (although I'll admit I did see a fairly major one coming), the action is superb, the characters are well written and the banter is spot on. I still haven't quite forgiven Andrew Shvarts for ripping my heart to shreds near the end but even so I can't wait to get my hands on the next book in the series!

If you like the sound of this book then make sure you enter the giveaway being hosted by Turnaround to celebrate the release of Royal Bastards. You could win a copy of the book and all you have to do is draw a picture of a Skarling based on this description:

*Skarrling’s are said to make ‘a skittering clicking sound, like someone running their nails on a pane of glass…’

Let your imagination run free and try to come up with the scariest idea possible! You can see some example pictures and information about how to enter on the giveaway post.