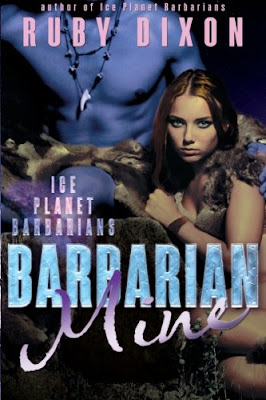 The ice planet has given me a second lease on life, so I'm thrilled to be here. Sure, there's no cheeseburgers, but I'm healthy and ready to be a productive member of the small tribe. What I didn't anticipate? That there'd be a savage stranger waiting nearby, watching me. And when he takes me captive, the unthinkable happens...I resonate to him.

Resonance means mating, and children...but I don't know if this guy's ever been around anyone before. He's truly a barbarian in all ways, right down to clubbing me over the head and claiming me as his own.

So why is it that I crave his touch and hunger for more?

Review:
You might remember in Barbarian Lover that Harlow was smacked over the head and carted off by a mysterious stranger when she was out with Kira, Aehako and some of the others. Well Barbarian Mine is Harlow's story and it introduces us to the most caveman like of the aliens so far (which is really saying something!). Rukh was raised by his father away from the rest of the clan and was taught to avoid them so ever since his father died he has lived completely alone. He has all the skills he needs to survive but let's just say his manners and cleanliness aren't the greatest because he's never had a need to worry about them. The minute he saw Harlow he knew she was meant to be his so what's a cave alien to do other than knock his woman unconscious and run so he can rescue her from the evil aliens?

I don't know what it is about this series but I'm totally addicted. There are a lot of reasons Barbarian Mine shouldn't work, I'm not usually a big fan of guys who think its okay to assault and abduct the women they're interested in thats for sure, so I was a bit sceptical going into this one but with some weird alchemy Ruby Dixon completely sold me on this pairing. I think it was because Rukh was just so damn adorable, he was quite innocent in a lot of ways but he was a fast and very willing learner when it came to anything that would please his woman. Harlow was pretty accepting of her situation but she wasn't a pushover and like all the women in this series she was smart and capable.

If you're looking for an alien smut fix I can't recommend this series highly enough and if you've never tried an alien smut series then this is definitely the one to start with!