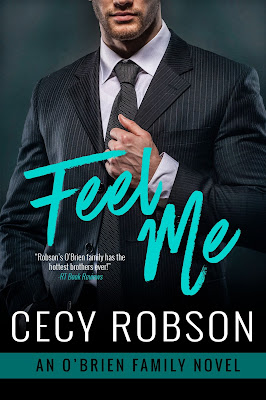 RT Book Reviews proclaims that the O’Brien Family series from award-winning author Cecy Robson “has the hottest brothers ever!” And in FEEL ME, Declan, the sexy, driven powerhouse meets the one woman immune to his charm . . .

Declan O’Brien was always driven to take his place among Philly’s elite, working hard for everything he’s earned, including the title of Assistant District Attorney. He’s won seemingly impossible cases, so he’s furious when he’s assigned to lead the one unit he doesn’t want.

Melissa Fenske was born hearing impaired to a neglectful mother, finding solace when she was adopted by a young attorney, now Declan’s boss. As the current Director of Victim Services, Melissa’s livid when Declan is placed in the main unit she oversees. She can’t forget their disastrous first encounter. Or shake how he makes her feel.

Declan considers the assignment another step toward his political aspirations, despite that he can’t get Melissa out of his mind. Melissa sees Declan as egotistical and self-serving, kicking herself for how fast she’s falling for him. Someone as hot, smooth, and perfect as Declan isn’t supposed to want her.

In another situation with any other woman, Declan wouldn’t hesitate to take Melissa to bed. But she is the boss’s daughter, and for once, Declan finds himself wanting more than just a one night stand.

Neither counted on each other. Both just met their match.

Review:
Feel Me is the latest release in Cecy Robson's O'Brien Family series and I've been I've been looking forward to Declan and Melissa's book ever since we saw their first meeting. I love the way confident Declan, the man who can charm any woman he comes into contact with, constantly puts his foot in his mouth around Melissa. He's the kind of guy that has women falling all over him but when it comes to Melissa he gets so flustered and makes all the wrong moves and it was just so funny to see him wrong footed all the time.

Declan is one of the oldest O'Briens and after the death of his father he was determined to do whatever he could to look after his mother and younger siblings. He has put everything into his career to achieve that goal and is now one of the youngest Assistant District Attorneys in Philly, his goals don't end there though and he continues to focus on his goal of eventually becoming mayor. Declan doesn't believe in love, he saw the way his father treated his mother and is convinced that relationships aren't worth the effort so he's very careful never to get involved with anyone who wants more than a couple of nights of fun. The latest step in his career ladder puts him in charge of the department Melissa works for, the attraction he feels for her is intense but there is no way he'd ever get involved with anyone he works with, especially not his boss's daughter.

Melissa is the head of Victim Services, it's her job to give a voice to people who need it most and her background means she is uniquely qualified for the role. Born hearing impaired to a drug addicted mother Melissa didn't get the best start in life but everything changed for her when she was adopted by Miles Fenske, the current District Attorney and Declan's boss. Her previous interactions with Declan haven't left a good impression and she has concerns about his ability to interact with vulnerable women and children she works with every day. Declan may not have made a good first impression but it doesn't take long for Melissa to realise that she was wrong about him and to discover how well they work together. Close proximity increases the attraction between them but Melissa would be crazy to risk a relationship with a man who doesn't believe in love. Wouldn't she?

I loved both of these characters and Melissa was fantastic, she's confident in her abilities and doesn't let her hearing impairment hamper her in any way. She has fears and insecurities like any woman but overall she sees what she wants and she goes after it. It was great to read about a heroine with a disability where her hearing impairment is just a part of her character and not something she was defined by, of course it effected her day to day life but it was never made into a big deal or a source of conflict in the story. Declan was the right mix of cocky alpha male with a vulnerable side. The way he kept getting things wrong around Melissa made him easier to relate to and stopped him from being too full of himself. I enjoyed the banter between him and his siblings and the way they all teased him about his growing feelings for Melissa, it was fun to catch up with the others and see how they're all getting on with their lives.

Feel Me is another brilliant instalment to the series and I'm looking forward to seeing the remaining brothers get their own happily ever after.