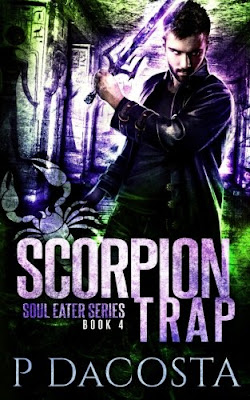 Given a choice, I’d prefer never to return to Egypt. Isis doesn’t do choices.

The old world is dead. Legend tells us the gods are myths. But some remain, like a noose around Ace Dante’s neck. And none are more dangerous than Isis. She demands the Soul Eater return to the land time forgot, break into a newly discovered tomb, and retrieve the skull from the sarcophagus inside. If Ace does this one thing, Isis will reveal the secrets he desperately seeks. Ace knows there’s a catch, there always is, but the truth is far worse than even he can imagine.

As Isis’s true intentions unravel, so does Ace’s past, leaving him no choice at all.

History is wrong. The past is a lie.

And for the Soul Eater, the truth found in Egypt is far more terrifying than any god.

Review:
If you haven't started this series yet you're really missing out, just imagine sociopathic Egyptian gods roaming modern day New York (and now Egypt) and multiply however awesome that sounds by at least 10 and you'll have an idea what you're getting here. I'd highly recommend reading the series in order though so go away and read my review of Hidden Blade and then BUY YOURSELF A COPY IMMEDIATELY!

Well if you thought their last trip to the Hamptons got complicated you've not seen anything yet. Isis wants Ace and Shu to travel to Egypt and steal a skull from a recently discovered tomb - what could possibly go wrong? Well when the Goddess of Light insists on going with them an awful lot actually and don't even think about what will happen when Osiris finds out his wife has taken Ace on a romantic getaway!

This series just keeps on getting better and Pippa DaCosta keeps blowing my mind with the shocking revelations she makes about poor Ace's past. I thought I knew where his story was going and now I have absolutely no idea but whatever happens it's bound to get worse before it gets better so I feel pretty sorry for him right now. He's such a brilliant character though, one with dark secrets and a delicious bad side. You never know what kind of move he'll pull next and he's just about done with being manipulated by crazy gods so things are getting extremely interesting. Shu is awesome too, totally badass and more than capable of standing up to Ace when he's being an idiot but equally capable of having his back when he's facing off against an army of enemies.

I loved the Egyptian setting here too, the author has captured the desolate feel of the desert and the majesty of the tombs and temples perfectly so it's like you're right there alongside Ace and Shu as they dig through tombs searching for what Isis needs. We get to meet some interesting locals, see Ace and Shu in action and uncover so much more of their past lives. I absolutely can't wait to see the results of certain revelations in Serpent's Game so I'm really relieved I've only got to wait until August to get my hands on a copy! That gives you plenty of time to catch up with the series though so make a start now and make sure you're ready.