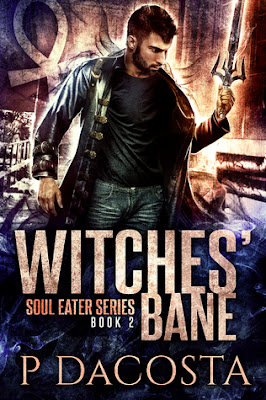 “I didn’t earn the name Godkiller, but in three days I’ll own it.”

Witches are disappearing all over New York and Ace Dante couldn’t care less. Until one holds his friend at gunpoint, demanding Ace take the job.

The witch produces a girl's severed arm, bearing an unusual hieroglyph, and Ace starts to care a whole lot more. He recognizes that mark. It’s connected to Ace in ways he doesn’t yet understand. Why is it on a dead witch’s arm?

Missing witches and severed arms aren’t Ace’s only problems. With a new name around his neck—Godkiller—Ace has a promise to uphold. He has three days to kill the god, Thoth. Or risk Osiris’s wrath. The last time Ace defied Osiris, he earned a curse that crippled his life and turned him into Osiris’s puppet for eternity.

This time, Osiris won’t be as lenient. Ace must kill Thoth. An impossible task. It takes a god to kill a god, and Ace is just a washed-up mercenary. Isn’t he?

As the spells are cast and the truth is revealed, there’s only one way out. Ace must become the monster the gods fear him to be.

The Soul Eater has a new name, and now, nobody is safe.

Review:
I loved Hidden Blade but wow, Pippa DaCosta has definitely upped the stakes in Witches' Bane. This series has quickly become one of my favourites and I absolutely can't wait to get my hands on See No Evil in a couple of months.

Ace is my favourite kind of anti hero, there is darkness inside him and he's definitely crossed plenty of lines in his time but he also tries to do the right thing and he stands up and fights for people less powerful than himself. He's walking a very fine line thanks to the curse that binds him to Osiris knowing that no matter how hard he tries to be good Osiris always has a hold over him and can force him to act against his will. Ace is compelled to kill Thoth at Osiris's command and even though he knows he doesn't stand a chance against someone that powerful he also knows that Osiris will take it out on his friends and allies if he fails. Throw in murdered witches, missing memories and meddling gods with plenty of time on their hands to play a very long game and Ace's life has hit an alltime low point.

Everything I loved about the first book was ramped up a level in this one, the story is darker, the gods are even more twisted and Ace is caught up in plots that are far more complicated and overreaching than he could ever have guessed at. Shu is totally brilliant and we meet a new (and equally badass!) sidekick that is going to help make Ace's life interesting. We're starting to dig a little deeper into the characters and I loved the glimpses we saw of Ace's history and finding out how he ended up in the situation he's in now. He's trying so hard to live up to Bast's assertion that there is good inside him but sometimes the past comes back to bite you and the stains on his soul aren't so easy to wipe clean.

If you're looking for an urban fantasy series that stands out from the crowd for it's unique mythology, brilliant world building and outstanding, three dimensional characters then you need the Soul Eaters series in your life. I love all of Pippa DaCosta's books and would happily recommend any of them but I think Ace might just be edging Caleb (from her 1000 Revolution series) out of the top spot on my favourite anti heroes list and that's very high praise indeed.