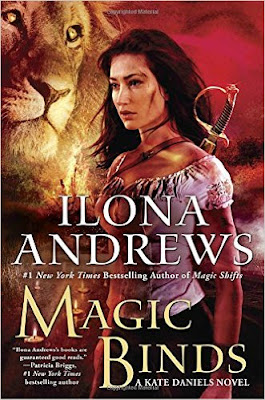 Mercenary Kate Daniels knows all too well that magic in post-Shift Atlanta is a dangerous business. But nothing she’s faced could have prepared her for this...

Kate and the former Beast Lord Curran Lennart are finally making their relationship official. But there are some steep obstacles standing in the way of their walk to the altar...

Kate’s father, Roland, has kidnapped the demigod Saiman and is slowly bleeding him dry in his never-ending bid for power. A Witch Oracle has predicted that if Kate marries the man she loves, Atlanta will burn and she will lose him forever. And the only person Kate can ask for help is long dead.

The odds are impossible. The future is grim. But Kate Daniels has never been one to play by the rules...

Review:
I honestly don't know Ilona and Gordon Andrews do it but the Kate Daniels series just gets better and better with every book. We're heading to the end of the series now (just one more book to go *sob*) so everything is building up and falling into place ready for the big finale and the only word to accurately describe Magic Binds is epic. The stakes are higher than you could possibly imagine, the confrontation between Kate and Roland is closer than ever before and shit just got real.

It's so hard to write a review for a book that's so amazing because I want to talk about all the things but at the same time I don't want to mention any of them and unintentionally spoiler people. Just trust me when I say this has all the humour you've come to expect from the series as well as some beautiful and heart wrenching moments. Kate shows a little of her dark side, Curran proves beyond a shadow of doubt what a perfect couple they make, Julie has me a little worried but I'm going to trust her to do the right thing, Ronan is the most hilarious wedding planner you could ever come across, Christopher remembers something very important and leaves Barabas looking rather flustered, Andrea and Raphael prepare for a new arrival, Jim is his usual idiot self but Dali sets him straight when he needs it, Derek frustrated me by not believing in Kate when he should have but at the same time made my heart melt because he was just trying to protect Julie, the shock reappearance of an old character was absolute genius and then there's Roland, loving father one minute, crazy dictator the next Roland is a complex character but one who can never be trusted.

I've already devoured this epic rollercoaster of a book twice and I'm contemplating reading it for a third time just because I still have such a book hangover and no other book is able to compete. There aren't any other series that come anywhere close to this one, it's urban fantasy at it's very finest and I'm not going to know what to do with myself when I don't have my yearly dose of new Kate to look forward to. At least I'll still have my annual reread to help with the withdrawal symptoms and of course everything Ilona and Gordon write in the future will jump straight to the top of my to read pile.