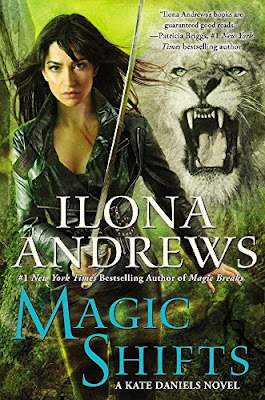 In the latest Kate Daniels novel from #1 New York Times bestselling author Ilona Andrews, magic is coming and going in waves in post-Shift Atlanta—and each crest leaves danger in its wake . . .

After breaking from life with the Pack, mercenary Kate Daniels and her mate—former Beast Lord Curran Lennart—are adjusting to a very different pace. While they’re thrilled to escape all the infighting, Curran misses the constant challenges of leading the shapeshifters.

So when the Pack offers him its stake in the Mercenary Guild, Curran seizes the opportunity—too bad the Guild wants nothing to do with him and Kate. Luckily, as a veteran merc, Kate can take over any of the Guild’s unfinished jobs in order to bring in money and build their reputation. But what Kate and Curran don’t realize is that the odd jobs they’ve been working are all connected.

An ancient enemy has arisen, and Kate and Curran are the only ones who can stop it—before it takes their city apart piece by piece . . .

Review:
I think I lost the ability to write a sensible review of anything written by Ilona and Gordon Andrews a long time ago and that goes double when it comes to their Kate Daniels series. I just absolutely adore this world and these characters and will never get enough of them. I have been eagerly waiting for Magic Shifts for a year now, I reread the entire series in the run up to it's release, I dove into the book the moment I got my hands on a copy and I absolutely loved it. I loved it so much that I read it twice within three weeks of the release date, something I hardly ever do.

Kate and Curran are without a doubt my favourite fictional couple and we get to see them on top form here. Things were a little rocky in Magic Rises, they improved in Magic Breaks but in Magic Shifts they are back in full force. They are a couple to be reckoned with, come after one and you have to take them both on because they always, always have each other's backs. I love that they're equals, Curran may have the edge on Kate physically but she's no slouch and with her skill with her sword and her powerful brand of magic she's a powerhouse in her own rights and Curran respects that about her. There may be times that he longs to lock her away from the world to keep her safe but he respects her and her abilities and knows that she can stand on her own two feet so instead he chooses to stand with her so they can fight their enemies together. There are some particularly poignant moments between the two of them in this book and there was definitely more than one point where I had tears in my eyes. I love seeing how far they've come as a couple and they really are stronger than ever now.

After the ending of the last book we knew there would be huge changes in this instalment, Curran and Kate are separating themselves from the pack and it's a complicated process that has a knock on effect on their friends and family. I don't want to say too much about what happens but I am very happy with the way things are currently playing out and I think it's going to be very interesting to see where the couple go from here. As always we get to catch up with some of our favourite side characters, some we don't see as much of as I'd have liked (I missed Derek in particular) but I enjoyed what we do see of them and they never fail to add humour to any situation. Julie really gets a chance to shine and there are some wonderful bonding moments between her and both Kate and Curran. Plus we have the reappearance of both Cuddles and Grendel who never fail to make my day.

One of the things I love about this series is the way the authors are always including new creatures to keep things fresh. I'd hate to spoil things for you so I'm keeping this vague but we get the chance to explore some Arabic mythology this time around and we see the Andrews' twist on some powerful new enemies for Kate. Of course just because they have new people to fight doesn't mean that their biggest threat has left the picture. Roland is still very much on the scene and his motives are still unknown. There are some moments when I'm convinced that he wants to be a proper father to Kate and that he's curious about the idea of having a daughter and family to love but there are other times when I keep expecting him to try and wipe her off the face of the planet and I actually kind of love how ambiguous he is. I honestly have no idea how this series is going to end and it's fantastic that the authors are able to keep me guessing.

Magic Shifts was everything I want from a Kate Daniels book, it was full of action, intrigue and mayhem, there were heartfelt declarations, hilarious conversations, moments of compete and utter anxious terror, interesting twists and a couple of huge hints about major events to come. In short it was perfect! So begins the incredibly long wait for book 9, although I know I'll reread the series at least once between now and then to tide me over.