Review: Anything but Broken - Joelle Knox 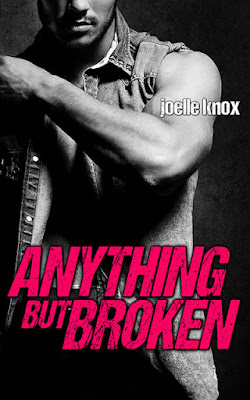 After five years, tragedy brings Hannah Casey back to Hurricane Creek to bury what’s left of her family. She’s flunking out of college, haunted by scandal, and the only person who cares is Sean Whitlow, an irresistible bad boy with a soft spot for her. The problem? He’s her dead sister’s ex.

Sean doesn’t bleed red, he bleeds motor oil. During the week, he struggles to turn his auto repair shop into a profitable business. But when Saturday night rolls around, he’s the reigning stock-car king of the local race track. He doesn’t know how to lose–or how to walk away and leave Hannah alone with her grief.

Between her grades and her wealthy family’s dark secrets, Hannah’s barely holding her life together. And the last thing Sean needs is to get tangled up with another Casey girl. As the attraction between them spins out of control, they’ll either find a love with no limits–or go up in flames.

Review:
Anything but Broken is the first book in the new Hurricane Creek series by Joelle Knox, AKA writing duo Bree and Donna who you may already know under one of their other pen names: Moira Rogers or Kit Rocha. I can understand why these authors choose to write under several names because each of their personas have a very distinctive voice and writing style, I'm a huge fan of everything that they write but not all of their books will appeal to everyone and it's good to have an easy way to tell what you're signing up for before you buy one of their books. Anything but Broken is like nothing they've done before but it still has innate their flare for story telling and for creating characters you'll come to care about.

Hannah hasn't returned to her home town since the death of her sister five years ago but now another tragedy has brought her back, this time a car crash that killed her father outright and left her mother in a coma. Her life is falling apart around her and Hannah doesn't even know how to start picking up the pieces. Sean used to date Hannah's sister and when he realises how alone Hannah is he sets out to take care of her. The attraction between them is intense but Sean is more interested in helping Hannah put her life back together and he doesn't want to rush her into anything. The connection between them is undeniable but they both have plenty of issues to work through if they are going to have any chance at making a relationship work.

Too often I find that NA romances revolve around guys who are players which leads to drama with exes or a lot bitchiness amongst the female characters and I'm sick of reading them so it's nice to find something that breaks the mould. The intensity in this story comes from the character's, from their past experiences and their way of looking at life, so there is actually very little in the way of conflict caused by the people around them. Hannah has been through a lot, her father was an alcoholic and her mother didn't deal with things very well so her childhood wasn't great. Her sister suffered with bipolar disorder but was never given the help she desperately needed because of the way her mother reacted and Hannah has spent years blaming herself for her sister's death and struggling to come to terms with what happened. She felt ostracised by her family and she never got the chance to make peace with them or get answers to the many questions she had. It's had a huge impact on her and now she's struggling to come to terms with everything and find a way to move forward.

Sean was her first crush but as her big sister's boyfriend he was completely off limits, of course five years later everything has changed. She's still just as attracted to him as ever but it looks like he might return the attraction and she's not quite sure what to do with that, especially considering the family secrets she is still keeping from him. I absolutely loved Sean, he was the perfect blend of protective, caring lover and sexy, slightly dangerous bad boy. He was an everyday guy who worked hard to keep his garage running by day and who spent his evenings and weekends as a race car driver. I've never really thought of stock-car racing as particularly sexy but Sean convinced me and I'm definitely looking forward to more of that side of things as the series continues. What I loved most about Sean was his patience and the way he looked out for Hannah, he can see just how broken she is but that doesn't scare him off and he works hard to help her build her confidence and get her life back on track.

Alongside the main couple we also have a great cast of secondary characters, I loved Sean's family and the way they took Hannah into the fold was really nice to see. There is a lot of fun banter between the siblings but they all care deeply about each other and I hope we get to see more of them all as the series continues. Hannah gets the chance to reconnect with her childhood friend Evie and I really loved seeing a strong and supportive female friendship between them, there is no petty jealousy, you just have two young women who care about each other and are there to support each other through the hard times. My favourite secondary character was Sean's friend Gibb though, in the beginning he is very against Sean's relationship with Hannah and I have to admit I was a little wary of his character but he really grew on me. Gibb obviously didn't want to see his friend get hurt and was trying to protect Sean and I could respect him for that but what I liked about him most was his ability to realise when he was in the wrong and the way he stepped up for Hannah to help her deal with something when he was in a unique position to offer her advice. Once we get to know him it becomes obvious that he's a really caring guy and I was incredibly excited to find out he's the hero of the next book.

I was already a huge fan of this writing duo but I'm definitely going to be adding their new Joelle Knox pen name to my list of auto-buy authors. I have a feeling that this is going to turn into one of my favourite NA series and it's definitely one I'll be recommending to anyone who likes to read about realistic, flawed characters who are dealing with tough emotional issues and who find the strength to rebuild their lives.