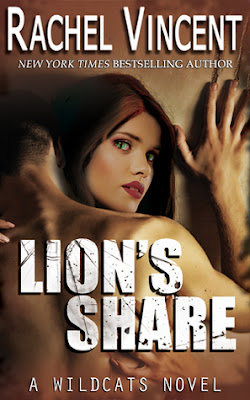 Abby Wade has a dangerous secret.

Two months ago, she disobeyed an order, but instead of kicking her out of the Pride, Jace offered her a job. Since then, she’s been battling a completely inappropriate crush on the young, hot Alpha. But when accepting his job offer seems like the only way to keep her skeletons safely in their closet, Abby doesn’t hesitate.

Jace Hammond has a big problem.

A rogue is slaughtering humans in his territory, and he must eliminate the threat before the entire shifter species is exposed. There could not be a worse time for Abby to accept a job he only offered as a boost to her confidence. Abby is smart, beautiful, and resilient—more than enough to distract any man from the mission. Unfortunately, she may just be the worst enforcer ever to hold the title.

As they hunt the killer, Abby’s secret becomes a threat to Jace’s authority and to her own life. But the real danger is the grip she has on his twice-shy heart.

Review:
I absolutely loved Rachel Vincent's Shifters series but although I was happy with the way the series ended I have missed the world and the characters over the last five years. So as soon as I found out about this new spin off series I pre-ordered my copy of Lion's Share and I started reading it the moment it appeared on my kindle. In fact, I read all night until I finished it at 8am because I was enjoying it so much! I've been a bit lax with my review writing this year though so I decided a reread was in order so I could rave about the story properly. I don't do much rereading and it's incredibly rare for me to reread a book more than once in a year so that's high praise indeed. Where the Shifters series is definitely urban fantasy, and all told from main character Faythe's point of view the Wildcats books are going to be more romance focused with each book featuring a different couple and told from dual perspectives.

In this first instalment we finally get to see Jace's story and I loved every minute of it. I was always team Marc when I was reading the previous books because I thought he was a better fit for Faythe but I still loved Jace's character and was a little heartbroken for him when he was rejected. In the couple of years since the ending of Alpha Jace has been running his sister's Pride, he knows he'll have to leave when she gets married but for now he's enjoying being Alpha and has worked hard to make a success of things. Unfortunately he now has problems, there is a stray werecat in his territory murdering humans and they are bringing down far too much attention from the authorities. The Council aren't happy and they're questioning is authority so he needs to resolve things quickly if he doesn't want to loose his position.

Abby is a survivor, she went through hell as a teenager but she came out the other side and has worked hard to gain her independence. She had a close circle of friends at college but if you read the short story, Hunt, which connects the two series you'll know that things haven't gone smoothly for her. This time when Abby was attacked she was able to fight back though and although the event has left lasting consequences she has come a long way from the scared child we first met. I loved seeing how much Abby has matured, she has really come into her own as a strong and independent woman. She loves wholeheartedly and she will do anything to protect the people she thinks of as her own.

I absolutely loved the romance between Jace and Abby, considering her previous experience she is understandably nervous but Jace is very patient and makes it clear that things will only move forward at a pace she is comfortable with. There are some incredibly sweet moments between the two of them but they also have fantastic chemistry and Rachel Vincent manages to make even the most innocent interactions between them practically sizzle the pages. Although this story is focused more on the romance than the previous books were that doesn't mean there aren't plenty of other things going on to hold your interest. You have the intrigue over the stray werecat, there are hunters who have been stalking Abby, Abby herself is keeping some pretty major secrets and we are reminded just what a bunch of pompous old fools half of the alphas on the Council are. There is a major upheaval at the end of this book that is going to have a huge impact on the werecats and I can't wait to see how this plays out in the next instalment.

I had so much fun being back in this world, it was great to catch a glimpse of characters I already knew and love but we have also been introduced to some new faces that I'm looking forward to spending more time with. I enjoyed this book so much that I've decided to dive straight into a reread of the Shifters series and I'm hoping that'll keep me going until the next book is released. Thank you Rachel Vincent for revisiting this world, I'm so excited to see where you're going to take us on this new journey with the Wildcats and I'll definitely be auto-buying anything else you release in this series.