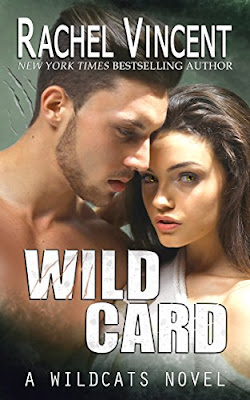 Kaci Dillon is a man-eater.

She’s grown up on the fringes of shifter society, hearing the whispers. One desperate act as a starving, terrified child has made her the first tabby in history with no romantic prospects. But whatever. Eighteen is too young to get married anyway. Still, when she stumbles upon an opportunity to get away for a few days, who could blame her for seizing it?

Confined to the South-Central territory, awaiting trial for crimes he committed as a traumatized, newly infected stray, Justus has discovered that the tribunal already intends to vote for the death penalty. He has no choice but to run. Too young to touch the trust fund that could finance his escape, he’s betting on a big win at the poker tables—until Kaci, his secret crush, catches him sneaking out and demands that he take her with him to Las Vegas…

After a wild night she can’t remember, Kaci wakes up with a ring on her finger, next to a young billionaire who can’t access his fortune until he turns twenty-five—or ties the knot. If she can keep her hands off her hot, charismatic new groom, she can have their unconsummated marriage annulled. But can she really abandon Justus to his death sentence, just to undo her own mistake?

Review:
Kaci is a bit unusual in the Shifters world, she is only a werecat because both of her parents carried recessive genes so she wasn't raised in a Pride and it was a complete shock to her when she hit puberty and turned into a giant cat. Totally traumatised Kaci ended up in a bad place and if she hadn't been rescued by Faythe and the others she would still be living wild in her cat form. Faythe and Marc have been like parents to her and she's been loved and cared for on the Lazy S ranch but because of her man-eater status (and I mean that in a literal sense rather than a figurative one) she is the only rare tabby who doesn't have a crowd of adoring toms just waiting for her to be old enough to marry. Sick of being looked at like a monster and overhearing the enforcers make snide comments when she sees a chance at a weekend of complete freedom she jumps at it.

Justus is a stray who was turned against his will and left to fend for himself as part of an elaborate plot against his brother Titus. He wasn't given any help during his transition period and ended up accidentally killing two people and infecting a third. To make sure he was given a fair trial Faythe and Marc took him into their Pride to give him the rights not normally extended to strays. When he overhears some of the other enforcers talking he realises that the outcome of the trial has been decided before the alphas have even heard his side of the story. Unwilling to just sit around and wait for his death sentence to be announced Justus plots his escape. The last thing he planned to do was take one of the pride's valuable tabbies along with him but when Kaci blackmails him into helping her he doesn't have much choice.

Rachel Vincent states at the beginning of the book that this has a lighter tone to the previous two Wildcats stories because Kaci is younger than the previous heroines and also because she has such a traumatic past. I have to agree that was the case but it didn't stop me enjoying Kaci and Justus's story just as much as all the others. Wild Card was much more humorous and I really loved the slow build relationship between the main couple, the attraction was there from very early on but Justus was very patient with Kaci and didn't want to push her into anything she wasn't ready for. They both had a difficult introduction to their lives as shifters and that made them understand each other in a way a lot of others didn't. I was actually incredibly angry with the way some of Faythe's enforcers spoke about Kaci, I couldn't believe they held her past against her when she was just a young and seriously messed up kid at the time it happened. I'm happy to say that they got what they deserved in the end but be prepared to be angry in the meantime!

I really loved the chance to catch up with Faythe, Marc and so many of the characters from the original Shifters series. As always there was plenty of political manoeuvring by the alphas going on in the background but I absolutely loved the way Kaci was able to talk her and Justus out of trouble on several occasions. That girl should definitely become a lawyer because she can talk anyone into her way of thinking! We don't see much of Titus in this instalment but he does make an appearance nearer the end of the book. I have to admit I was annoyed by one particular thing he did but he came around eventually and redeemed himself in the end. There are some huge changes in this book that are bound to have a knock on effect as the series continues and I can't wait to see what is in store for the rest of the strays now. I can't tell you how much I love being back in this world, the Shifters series is still one of my favourites and this spin off is just as fantastic so I'm hoping we have many more books still to come!