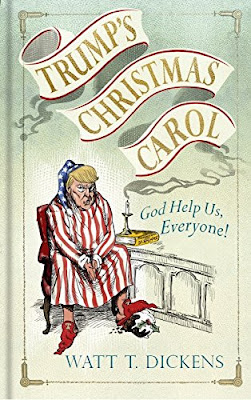 ‘I have the best ghosts, everyone says so’

President Ebenezer Trump, a rich old fool whose heart is as small as his hands and whose words are as false as his hair, sits shut up alone in the White House on Christmas Eve. But he is confronted that night by the ghost of Richard Nixon, who warns him that he will be visited by three spirits, all intent on changing his imprudent and miserly ways.

But will Trump heed their advice, and become a good person?

Review:
I loved Lucien Young's Alice in Brexitland parody so of course I jumped at the chance of reviewing his second book, Trump's Christmas Carol. As you can tell from the title this is Young's take on Charles Dickens' Christmas Carol staring president Ebenezer Trump. Told in the same style as the original story (so very different to the previous book) we get to see the mean and miserly Trump confronted by the ghost of Christmas past Bill Clinton, the ghost we wish was Christmas present Barack Obama and a mysterious ghost of Christmas future.

As you'd expect with any story about Trump there is plenty of material to use that just begs to be laughed at - tiny hands, the Russian connection, that video, the constant tweets, the insecurity and ignorance plus so much more. There are appearances from people like Hilary, Farage and Melania to add to the fun. I don't think the humour quite hit the highs of Alice in Brexitland but I definitely laughed out loud several times while reading. I think I'd probably have found it even funnier if I wasn't still so horrified about the state of the world right now and if the future shown by the ghost of Christmas yet to come didn't feel quite so awfully believable.

The book has line drawn illustrations that were just as funny (and accurate) as the text and made a lovely addition to the story. 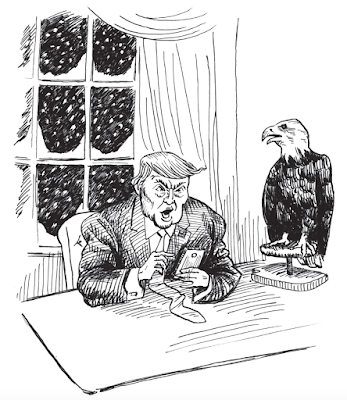