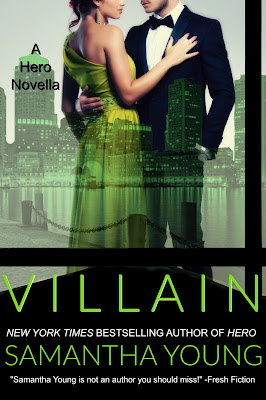 Nadia Ray is not just a broadcast meteorologist. She’s Boston’s morning television It Girl. Successful and independent, she’s put a past she’s ashamed of behind her and is forging a future she can be proud of. However, when her new boss discovers her secret he blackmails her, intent on using Nadia’s popularity to make them the number one morning show in Massachusetts. He wants her to be part of uncovering the city’s biggest scandal - a secret billionaire Caine Carraway is hiding.

Soon Nadia is thrown into the path of Caine’s best friend: sexy, wealthy bachelor Henry Lexington. But she doesn’t encounter the dashing high society gentleman Henry is purported to be. Instead she’s faced with an insulting and defensive villain who misjudges her at every turn.

When Henry finally realizes the truth, and decides to make amends, Nadia wants nothing to do with him. But she underestimates his determination and charm and soon they find themselves embroiled in an intense, passionate affair.

An affair Nadia knows must come to an end before their feelings grow any deeper and he discovers her secrets.

After all, Henry Lexington isn’t the only one who played the part of a villain once…

Review:
It's been a couple of years since I read Hero so I have to admit I didn't remember anything about Caine's best friend Henry who is one of the main characters in this companion novella but I love Samantha Young's writing so of course I've been looking forward to reading this story. I'm glad I did because Villain is a fab novella with a really sweet romance and genuinely nice characters, I actually would have liked a longer story for them, not because this was missing anything but because I'd have been happy to spend more time with them.

Obviously with novellas authors have to dive straight into the romance but Samantha Young didn't have any problems creating a believable story that had me rooting for her characters to get it together. Nadia was great, there was something in her past that she was very ashamed of but she had done her best to put that behind her and move on with her life. Unfortunately for her her sleazy boss found out her secret and was willing to use it to blackmail her but I was really proud of her for the way she stood up for herself in the end. Henry was a known playboy but he was also a nice and caring guy and apart from a couple of moments at the beginning where he acted pretty badly I really liked him. I think what helped was that once he realised the mistakes he'd made he was genuinely sorry for his actions and went out of his way to apologise to Nadia and make amends. He was also incredibly sweet and let her take their relationship at her own pace, he understood that she was scared to be in a relationship and was willing to work to earn her trust. His reaction when he found out about her past was also wonderful, I can't say too much because it could be considered a spoiler but he told her all the things I'd been wanting to say since I found out what had happened and that got him a huge thumbs up.

It was nice to see a glimpse of Caine and Alexa but this story really was Nadia and Henry's time to shine so they were only minor background characters. This story fits into the timeline somewhere in the middle of Hero but I don't think it really included spoilers for the other couple's story so you could probably read these in any order. Villain is another lovely romance from Samantha Young and I'm already looking forward to her next one.