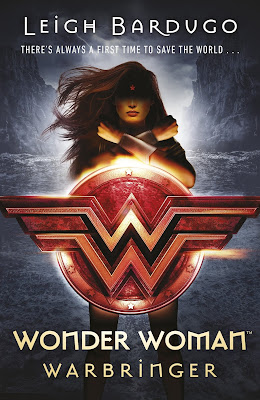 She will become a legend but first she is Diana, Princess of the Amazons. And her fight is just beginning . . .

Diana is desperate to prove herself to her warrior sisters. But when the opportunity comes, she throws away her chance at glory and breaks Amazon law to save a mere mortal, Alia Keralis. With this single heroic act, Diana may have just doomed the world.

Alia is a Warbringer - a descendant of the infamous Helen of Troy, fated to bring about an age of bloodshed and misery. Diana and Alia will face an army of enemies, mortal and divine, determined to destroy or possess the Warbringer.

To save the world, they must stand side by side against the tide of war.

Review:
After loving the recent Wonder Woman movie and as a huge fan of Leigh Bardugo's writing I was really looking forward to this book and I'm happy to say it didn't disappoint. This is an alternative version of Wonder Woman where Diana is a teenager in the modern day so the plot was different to the movie and other versions of the story but there were a lot of things that were familiar so it still had the right feel to it.

Diana loses her chance to prove herself to the other Amazons when throws a race to save the life of a mortal girl and bring her back to the island. Visitors have never been allowed but it turns out that Alia is more dangerous than most - she is the current incarnation of the Warbringer, a being who causes war and devastation wherever she goes, and who could destroy the world if she's allowed to live. Diana is desperate to fix the mistakes she has made but she can't let Alia die so when she finds out that there is one possible way to cure Alia's curse she knows she has to at least try to save her new friend.

This was such a fun story to read, with a wonderfully diverse cast of characters, a hint of romance and most importantly of all brilliant, strong female friendships. Diana and Alia are joined on their journey by Alia's brother Jason and their friends Nim and Theo. Each of them have their own skillset to bring to the quest and they all have a role to play in saving Alia and stopping the end of the world. I'll admit the beginning felt a little slow, mainly because it felt so familiar to the beginning of the movie, but once the story gets going the pace built up nicely and towards the end the action was nonstop. It wouldn't be a Leigh Bardugo book if she didn't throw a twist or two at you and I was definitely caught unaware by one of them. The story wrapped up really nicely but I can't help hoping that there will be more Wonder Woman stories to come, in the meantime I'm looking forward to reading other popular YA author's takes on their favourite superheroes - next up is Batman: Nightwalker by Marie Lu.