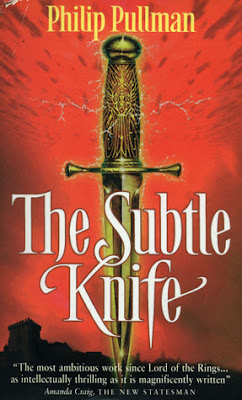 Will is twelve years old and he's just killed a man. Now he's on his own, on the run, determined to discover the truth about his father's disappearance.

Then Will steps through a window in the air into another world, and finds himself with a companion - a strange, savage little girl called Lyra. Like Will, she has a mission which she intends to carry out at all costs.

But the world of Cittagazze is a strange and unsettling place. Deadly, soul-eating Spectres stalk its streets, while high above, the wingbeats of distant angels sound against the sky. And in the mysterious Torre degli Angeli lurks Cittagazze's most important secret - an object which people from many worlds would kill to possess . . .

His Dark Materials:
Once Upon a Time in the North (Novella)
The Collectors (Short Story)
Northern Lights (Released as The Golden Compass in the US)
The Subtle Knife
The Amber Spyglass
Lyra's Oxford (Novella)

The Book of Dust:
(Companion series to His Dark Materials)
La Belle Sauvage

Review:
I've been a fan of the Dark Materials series for such a long time now, it's one I've reread so many times over the years that I've completely lost count, so I think it's fairly obvious that these books hold a special place in my heart. I've tried to review The Subtle Knife before but I'm not sure I really have the words to do it justice. Stepping back into this world is like stepping back in time though, it brings back so many memories and always puts a smile on my face.

This book picks up Lyra's story pretty much immediately after the ending of Northern Lights (published as The Golden Compass in the US), she followed her father through to another world and has now found herself in a strange place with no adults where kids roam freely in gangs. The city is plagued by invisible Spectres that feed on people's souls but they have no interest in children and only attack after adolescence sets in. It is in Citagazze that Lyra's path crosses with Will, a young boy from our own world who is on the run from men searching for his father who has been missing since an expedition many years ago. Will has so many questions and Lyra is the only one who might have some answers for him so they choose to work together as they search for his missing father.

Lyra is just as impulsive as ever which has a tendency to get her into trouble but with Will's help she's learning to think things through before she acts. He's much more cautious so reigns her in a bit but he's just as fiercely determined to find out what is really happening and he's intelligent enough to figure out the best way to move forward. They actually make a great team, she brings him out of his shell and he tempers her wilder side, they're both from different worlds so bring different skills to the table and of course Lyra always has Pantalaimon at her side to help them.

You'll see plenty of familiar faces from the first book along the way as well as meeting new ones. Lee Scorsby and the witches all have a part to play and so does Mary, a scientist from our world who has been studying Dark Matter. Her storyline is only just starting though and gets much more interesting in the next book. I started this reread because I'm so excited about the new trilogy Philip Pullman is writing, I've waited a long time for him to revisit this world and I'm incredibly excited to pick up my copy of La Belle Sauvage but there are so many things I'd forgotten from the original series that I'm glad I decided to reread it first.