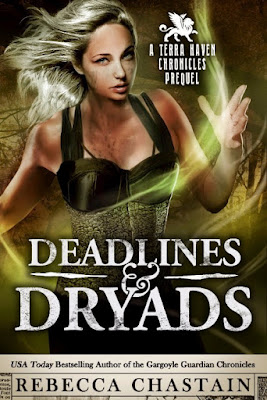 Getting the scoop might cost Kylie and her gargoyle their lives...

Dryads are a reclusive, passive species—or they used to be. Overnight, the peaceful woodland creatures have turned violent, attacking travelers with crude weapons and whipping the trees of their grove into a ferocious frenzy.

When rumors of the dryads’ bizarre behavior reaches journalist Kylie Grayson, she pounces on the story, determined to unearth the reason behind the dryads’ hostile transformation. Accompanied by the young gargoyle Quinn, Kylie plunges into the heart of the malevolent grove. But nothing she’s learned prepares her for the terrifying conflict she uncovers...

Deadlines & Dryads is a standalone novel and does not require you to read the Gargoyle Guardian Chronicles trilogy first...but it will make you want to read it when you finish.

Terra Haven Chronicles:
(Set in the same world as the Gargoyle Guardian Chronicles but featuring side character Kylie)
Deadlines and Dryads (Novella)

Review:
Deadlines and Dryads is the first story in a new series set in the same world as Rebecca Chastain's Gargoyle Guardian Chronicles. You don't have to read the original series first (although I'd highly recommend it because it's one of my favourites!) but if you are familiar with the previous stories then you'll recognise a few of the characters in this spin off. Reporter Kylie was one of my favourite side characters in the other books so I was really excited when I found out she was getting her own series, she's such a fun character and this story really gives her a chance to shine.

A once in a lifetime event is about to happen and the Terra Haven newspaper has given all of it's reporters 48 hours to come up with the most impressive story they can find. The winner will be sent on the trip of a lifetime and given the chance to report exclusively on an event that occurs only once every few hundred years. Kylie may be a junior reporter but she is absolutely determined to win, she even has her eye on what could be the perfect scoop. Well it was until her sneaky coworker started following her around so he could write the prize winning story on the back of her hard work. The only chance Kylie has is to make sure she gets her story written faster than Nathan can but she's going to need all the help she can get to achieve that goal.

I love how determined Kylie is and the way she is able to keep fighting for what she wants no matter how many knocks she gets along the way. Nathan is despicable but I think pretty much all of us will have come across someone like him at some point in time, the kind of person who isn't willing to put the effort in but will cut any corner he can to make sure it looks like he did. It would have been so easy for Kylie to give up and let Nathan get the better of her but she's stronger than that and I couldn't have been more happy every time she outmanoeuvred him!

Luckily Kylie has a few allies in her corner to help, starting with adorable gargoyle and reporter in training Quinn. You might remember Quinn as one of the gargoyles rescued my Mika in the original series but he's become rather attached to Kylie and the two of them make a great team. He is ridiculously cute but also a steadfast and powerful companion and I loved seeing how curious he was about everything Kylie was doing. Her less reluctant ally is Grant, member of the FPD (Federal Pentagon Defence) who also appeared in the previous books. Grant is the leader of his FPD unit but he's investigating his current job alone while the rest of his team are tied up with another case. He would rather keep Kylie out of harm's way and well away from the action but once he realises how determined she is to see things through he realises they might as well work together and ends up accepting her help.

This is a brilliant start to Kylie's series, the story is fun and fast paced and I found it an incredibly quick read. It's also full of interesting supernatural creatures that you don't come across very often in young adult urban fantasy. While the story works as a complete stand alone you get a few hints about where the series is going and I'm definitely very interested to see what happens on Kylie's next assignment.

Paperback / Kindle (currently only available in the Elementals anthology):