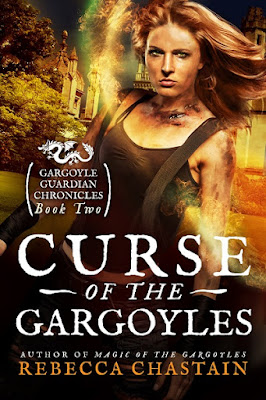 Mika was trying to save a gargoyle, not doom the world...

Mika Stillwater isn’t known for her skills with combat magic. As a gargoyle healer, she spends her days mending broken appendages and curing illnesses in the living-quartz bodies of Terra Haven’s gargoyles. But when a squad of the city’s elite Federal Pentagon Defense warriors requests her assistance in freeing a gargoyle ensnared in a vicious invention, Mika jumps into the fray.

No one could have predicted that her involvement would ignite a chain reaction set to destroy the city, the world, and magic itself.

Brimming with epic magic and loveable gargoyles, Curse of the Gargoyles is the second story in the mesmerizing Gargoyle Guardian Chronicles trilogy. Fantasy fans young and old will delight in this highly original world and exciting, action-packed adventure.

Don’t miss the riveting adventure that starts it all: Magic of the Gargoyles!

Terra Haven Chronicles:
(Set in the same world as the Gargoyle Guardian Chronicles but featuring side character Kylie)
Deadlines and Dryads (Novella)

Review:
Now that Mika has discovered her special skills as a gargoyle healer she has been putting them to good use helping to ensure the city's gargoyles are fit and healthy. She still isn't the strongest magical user in general and only has a low level of ability for anything but her earth element but when it comes to her quartz speciality she is second to none. She has managed to keep out of the limelight since rescuing a clutch of baby gargoyles and doesn't really want to get involved in defensive magic again but when a squad of Federal Pentagon Defence warriors request her help to protect a severely abused gargoyle she knows she has to do whatever she can. Unfortunately the gargoyle in question has been linked into a spell that has become highly destructive and unstable so if Mika and the FPD squad aren't able to find a way to break it the whole city could be destroyed in the fallout.

If you enjoyed Magic of the Gargoyles then Curse of the Gargoyles will blow you away! I was excited to get my hands on this story and read about Mika's next adventure but I don't think I even have the words to describe how much I loved this book. Everything I enjoyed in the first story is back here but bigger and better than ever. Mika has so much courage that even though she's relatively inexperienced compared to the squad she is working with she manages to hold her own, she also has an instinctive way about her when it comes to using the quartz element and that is what really makes her so outstanding when it comes to helping gargoyles in need. I just have to say how much I love Rebecca Chastain's descriptions of the elemental magic that Mika and the others use, she creates such vibrant images in my head while I'm reading that it's almost like watching a movie.

We still have the wonderful friendship between Mika and Kylie, they have such a brilliant connection and I enjoy seeing the way they always watch out for each other, it was also great catching up with the FPD squad we were introduced to in the first story and I liked that there are hints of a bit of romance in the air for both Mika and Kylie. As per the first book it was Oliver and his gargoyle siblings who stole the show though, they were adorable babies before but now they're growing bigger and have become much more independant. They all love Mika but she has a very special bond with Oliver and he is always by her side when she needs a magical boost. It wasn't just Mika showing her bravery in this story, Oliver and the others also put themselves in harm's way to protect the city and every other gargoyle in it, they do it because they trust in Mika to keep them safe and I loved that they had so much faith in her even when she's doubting her own abilities.

I can't think of a single negative thing to say about this story apart from that I wanted it to be longer, not because it wasn't completely satisfying in it's own right but because I would have been very happy to spend a lot more time in this world! The brilliant news is that the third story, Secret of the Gargoyles, is due to be published in June so we don't have too much longer to wait and I'll be at the front of the queue to start reading it on release day. I'm keeping my fingers crossed that the series will end up being a lot longer than a trilogy though, one more story definitely won't be enough!