I'm thrilled to be taking part in the UK blog tour to celebrate the release of the third book in Kate Baxter's Last True Vampire series, The Dark Vampire. If you're a fan of J.R. Ward's Black Dagger Brotherhood or Lara Adrian's Midnight Breed series who hasn't discovered this series yet you are definitely missing out so what are you waiting for?

I have a fabulous guest post from Kate Baxter to share with you today but before we get to that let me give you a little more information about The Dark Vampire: For centuries, Jenner has been plagued by the shadows of his past. Now a newly turned vampire, he stalks the night like a wild predator, unable to satisfy his desires. Until a beautiful vampire sets his soul on fire . . .

Bria is pure innocence, hidden her whole life from a merciless enemy determined to hunt her down. When things become perilous, safety comes in the form of a fearsome bodyguard - Jenner.

Bria and Jenner's fates are shaken for ever when a blazing connection is sparked. But surrendering to the powerful call of passion means breaking free from the shackles of their pasts. And, with the war against the slayers more savage than ever, they must fight to survive. For the vampire race depends on it.

Now I'm thrilled to share this post from Kate Baxter all about the appeal of damaged heroes and all the reasons why you need to read Jenner's story!


Damaged Goods – The Appeal of Tortured Heroes
By Kate Baxter

The tortured hero is a romance staple. The more wounded, the better. Let him ooze angst and we’re on board! Maybe it’s because the feminine instinct urges us to be nurturers and fixers. To want to take that damaged soul and mend it. And there’s a certain smug satisfaction in knowing that of all the others who tried, you were the only one who could make him whole. I’m a sucker for a tortured hero as well which is why I had no choice but to slap the label of “damaged goods” on Jenner in THE DARK VAMPIRE.

Jenner’s damage is 100% psychological. He’s an emotional mess. His self-worth is in the gutter and he’s spent centuries convincing himself that he isn’t worthy of love or tenderness. He embraces his anger, his violent tendencies, the dark side of his personality because it helps to build a wall between him and anything or anyone who might try to get close. It’s a trait that we all can relate to. You can’t be hurt if you keep everyone at arms’ length and refuse to let anyone see your vulnerabilities.

How is that appealing, though? Wouldn’t confidence be more alluring? Or strength? Shouldn’t we be more attracted to the hero who has his shit together and knows what he brings to the table? Not in this case. I think it’s the juxtaposition that tugs at our heartstrings. The tall, muscular, seemingly herculean male who’s as fragile as a hatchling on the inside.

As readers—and nurturers—we want to coddle this hero and make all of his angsty woes disappear. It isn’t that easy, though. The damaged hero can’t be fixed simply because the heroine cups his baby bird emotions in her palms. In romance, just like real life, opposites attract. We look for partners who possess qualities that we lack. The damaged hero needs a little tough love. He needs a partner who sees past his insecurities and gives him a swift kick in the ass. We root for the heroine, though, because even though she exercises that tough love, she sees past the image of unworthiness that the hero projects. She sees all of the wonderful things about him that he doesn’t. And through her acceptance of his broken bits and pieces, he finds peace.

That’s the true appeal of the tortured hero. Not the fact that he can be “fixed,” but the fact that through love, he can find self-acceptance. Because that’s what we all want. Acceptance.

Thanks for a fab guest post Kate! I can definitely attest to Jenner's worthiness as a tortured hero :o) You ladies out there are going to love him (but just you try and steal him from my book boyfriend harem, just you try!!). Keep an eye out for my review which will be posted later today but in the meantime you can also check out the rest of the stops on The Dark Vampire Blog Tour here: 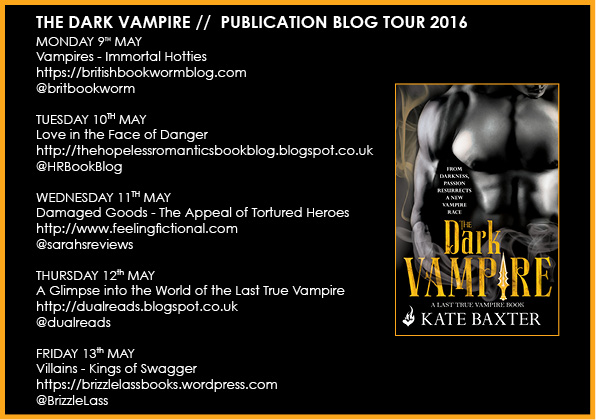