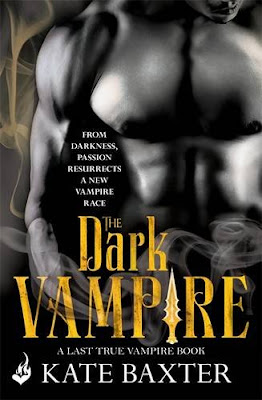 For centuries, Jenner has been plagued by the shadows of his past. Now a newly turned vampire, he stalks the night like a wild predator, unable to satisfy his desires. Until a beautiful vampire sets his soul on fire . . .

Bria is pure innocence, hidden her whole life from a merciless enemy determined to hunt her down. When things become perilous, safety comes in the form of a fearsome bodyguard - Jenner.

Bria and Jenner's fates are shaken for ever when a blazing connection is sparked. But surrendering to the powerful call of passion means breaking free from the shackles of their pasts. And, with the war against the slayers more savage than ever, they must fight to survive. For the vampire race depends on it.

Review:
This series is going from strength to strength and I now have a new favourite hero in Jenner. If you like your heroes dark and brooding with a side of protective alpha and incredible skills in the bedroom you're going to fall for him just as hard as I did. We've all seen in the previous book that Jenner is a vampire with large appetites, he is fighting for control and coming close to losing it so he is absolutely terrified of getting close to Bria in case he hurts her. From the moment he sees her she tempts him more than any other and even the return of his soul, thanks to their tether, isn't enough to make him trust himself to keep her safe. Jenner sees Bria as everything that he isn't, she's from a privileged background and led a very sheltered upbringing so he is sure he'll never be able to give her what she needs.

What he doesn't realise is that Bria is sick of being treated like a prized possession by her family and she has no intention of letting her mate do exactly the same thing. She may have been sheltered but she knows exactly what she wants and needs and that's the freedom to be herself and to explore the world around her, she spent her whole life trapped in a gilded cage by her uncle and she never wants to feel that way again. What she wants from her mate is a man she can share love and passion with but also someone who will treat her like an equal in every way. She is sick of being seen as weak and she's determined to stand on her own two feet for once. I really liked how strong Bria was, she stands up to Jenner when she needs to and she won't let him intimidate her with his caveman routine.

These two make a great couple, Jenner has very good reasons for being worried about hurting Bria but she knows him better than he knows himself. She can see exactly what he needs and she's not afraid to let him have it. Jenner was the right amount of protective alpha mixed with attentive and adoring lover, it took Bria a long time to break through his walls but once she did there was no stopping him! This was definitely the hottest book of the series so far but I love that Kate Baxter really takes time to develop the emotional connection between the couple alongside the physical one.

I'm really enjoying seeing where this series is going, it has similarities with several other popular paranormal romance series but enough differences to stand out from the crowd in it's own right. I'm a little nervous that the next book might end up being about Siobhan and Christian but I'm hoping I'll be proved wrong on that since I'm not much of a fan of either of their characters. I really want to see more of Chelle, Lucas and Saeed though so I'm hoping we'll get on of their stories next and Siobhan can continue to have her story told in the background of each book. Either way I'll definitely be continuing this series, I'm enjoying the world and I want to see what happens to the characters I already love as well as the ones we're only just being introduced to.