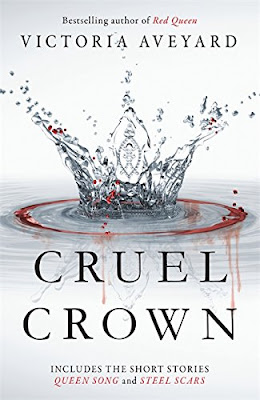 In a world divided by blood - Red or Silver - two women tell the stories no one else knows.

For Coriane of House Jacos, love comes at a terrible cost. In a secret diary, she recounts her heady courtship with the heir to the Silver throne, Prince Tiberias, and the dangers that lurk at the heart of the royal court.

Captain Farley is at the forefront of the Red rebellion. As she plans an attack on the Silver capital, she discovers a secret that could sway the balance of power for ever.

Review:
Cruel Crown is an anthology containing 2 prequel novellas in Victoria Aveyard's Red Queen series: Queen Song and Steel Scars. Technically these stories are both set before Red Queen (Steel Scars actually has a little bit of crossover time wise but Queen Song is set well before the start of the series) I would actually recommend waiting until after you've read the first book before picking this up.

I'm going to talk about each story separately but I wanted to warn you that just over 50 pages of this 200 page book are an extract for the second book Glass Sword so this book is even shorter than it looks. Luckily this does seem to be reflected in the price but I was shocked when the stories came to an end only three-quarters of the way into the book so it's worth mentioning! Although I thought this anthology was okay I don't think it added a huge amount to the series and I don't think you'd be missing out on much if you decided to skip it.

Please note that when I'm writing the rest of this review I'll be doing it assuming that you've already read Red Queen so if you haven't look away now or you'll end up seeing spoilers.

Queen Song:
This story is set years before the main series starts and gives us the chance to see how Cal's parents first met and fell in love. There were a lot of rumours flying around in the first book that Coriane had used her abilities as a kind of mind control to make Prince Tiberias fall in love with her but this gives us the chance to see what really happened. It also gives us a glimpse of a younger Julian and shows quite how far Elara was prepared to go to get what she wanted. I don't think this actually gave us any information that we didn't find out in Red Queen anyway but it was nice to see things through Coriane's eyes and we get to meet baby Cal which was cute.

Steel Scars:
The second story is told from the point of view of Captain Farley and starts just before Red Queen with some overlap in the timeline which the main reason I think you should read the full length book first. I was really excited about this story and getting more of an inside track on the Scarlet Guard but I have to admit I was a little disappointed. We get to see a few familiar faces but nothing much actually happens so I found myself getting bored during this one.

I also wasn't a fan on the format of the coded messages sent between Farley and her point of contact, not only were they hard to understand at times but the text used for these messages was VERY repetitive which got irritating really quickly. At one point you had the phrase "The following message has been decoded. Confidential, senior clearance required" repeated EIGHT times in the space of three pages! It's a shame because this story could have been great but there actually seemed to be very little point to it in the end.