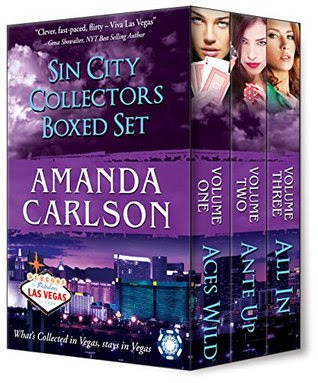 Welcome to Vegas. Home of the Sin City Collectors. The job description is easy: Bring the offending supernatural in to the Boss and don't ask any questions.

*The characters in these 3 installments interact on the page to make for one fun novel!*

ACES WILD, Vol. 1
Nevada Hamilton has learned a few things since becoming a Sin City Collector, and staying away from vampires is one of them. After botching her first Collection, she hasn't been assigned to another one since. But when she receives her next playing card, she's in for a surprise. Not only is a vampire her next target, but they've paired her up to make sure she gets the job done right.

Being a hellhound isn't enough to protect Jake Troubadour from Nevada Hamilton, no matter how thick his skin is. Finding out he has to work with the beautiful dhampir, after not seeing her for three years, is a low blow--but Jake is a professional. He takes his Collections as seriously as he does running his bar. He'll do whatever it takes to get the job done.

ANTE UP, Vol. 2
Diesel Jones is a shifter with moon issues. His dream of becoming a Sin City Collector has lingered in the shadows because of his inability to control himself. But when Louie Fiore decides to test his merit, Diesel jumps at the chance. When he finds he has to come up against an incubus, painful issues from the past resurface and he only has one thing on his mind--kill.

Sofia Cabrera is the new witch in town, and she's more than anyone bargained for. She finds herself drawn to Diesel, the sexy shifter, the first moment she lays eyes on him. When she finds herself the target of an organization of incubi, Diesel comes to her aid unexpectedly and they end up fighting the threat together.

ALL IN, Vol. 3
Ginger Elliot is a succubus on the run. She's in danger of being Collected, but her first priority is to find her brother. Even though she operates the biggest spy network in the supernatural world, it may not be enough to free her from the crimes she's been accused of committing. But keeping her deteriorating condition from the sexy shifter who's accompanying her is getting trickier by the hour.

Luke Jones is on a mission to save the succubus he's fallen for--not only from her brother--but from herself. The two have been on the incubus's trail for weeks and finally have him backed into a corner. Luke knows Ginger is in trouble, but he has no idea how to save her.

For more information about any of these authors you can visit their websites by clicking the links below:
Amanda Carlson
Kristen Painter

Review:
The Sin City Collectors series is a collaboration between Amanda Carlson and Kristen Painter, each author has written 3 stories set in the same world that are available either as stand alone novellas or in one of two collections. This first volume contains all of Amanda Carlson's contributions: Aces Wild, Ante Up and All In, the three stories all follow on very closely from one another so although each novella features a different couple there is a story arc that goes across all three. I'm not sure if there is any crossover of characters into Kristen Painter's novellas as I've not read those yet but I believe they have a similar story arc and would also be best read in order.

Each of these stories features characters who are members of the Sin City Collectors, an elite team who are tasked with tracking down supernaturals that have broken the law and they will do whatever it takes to bring their target to justice.

Aces Wild
Dhampir Collector Nevada has only one rule, she does not bring in vampires. Ever. So she's not best pleased about her latest job, especially since the boss has paired her up with the sexy hellhound Jake to make sure she gets the job done. Nevada and Jake have history and although their last meeting might have been the hottest night of her life it didn't end well so she has no intention of going back for more. Jake has never forgotten the night they shared though and he's not about to let Nevada walk away for a second time without putting up a fight.

Ante Up
Diesel is a shapeshifter who has been trying to get a job with the Sin City Collectors for a long time but his issues with control around the full moon have always made him too much of a wild card. Now he is finally being given the chance of a lifetime and if he can bring in a rogue incubus he'll land his dream job. The incubus has set his sights on a powerful local witch Sofia and Diesel will do whatever it takes to protect the woman who has slowly been stealing his heart.

All In
Ginger is a succubus who has spent years searching for her brother and trying to rescue him from the clutches of a criminal organisation but all her efforts have earned her is a target on her back thanks to the way that the Sumerians have set her up to take the fall for their own activities. Shapeshifter Luke has been tasked with bringing in both Ginger and her brother but he is determined to help her gather enough evidence to prove her innocence before he does. He also has every intention of keeping her safe from her brother, no matter what he has to do to succeed.

The Sin City Collectors Boxed Set is an enjoyable anthology of short but hot reads and I really liked the world the author has created. I actually listened to the audiobook version and I thought that narrator Emma Wilder did a great job reading it. My only complaint was that I didn't really like the voice she used for Sofia's character but that was definitely a personal taste thing rather than a problem with the story or narrator. I'm hoping that Amanda Carlson might decide to write more stories in this world (if nothing else I'd definitely love to read more about Raoul!) but I'm looking forward to picking up Kristen Painter's collection in the meantime.

Source: Received from the author in exchange for a honest review