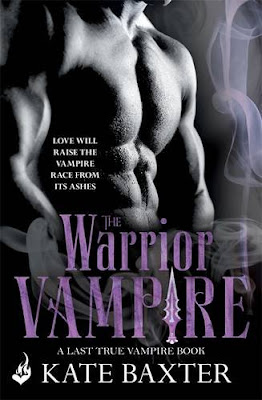 For hundreds of years, Ronan Daly has hungered to be turned into a vampire. Now his time has come, he's ready to serve his king and resurrect the vampire race to glory.

Naya Morales is no ordinary mortal, but part of a secret tribe dedicated to hunting down stolen magic. One fateful night she's led to Rowan - a thief set to change the course of her fate forever.

Ancient law orders Naya to kill her prisoner, but she can't ignore the formidable vampire's pull on her soul. And once they surrender to desire, a torrent of addictive passion is unleashed. But dark magical forces are at play and, with the bloodthirsty wrath of Naya's tribe to contend with, their love faces a deadly battle . . .

Review:
Ronan has waited centuries for Michael to turn him into a vampire and now all he wants is the chance to help his king rebuild their race. When his twin sister Chelle calls asking for his help with an ancient vampire relic that she has finally uncovered he drops everything to go to her aid. Unfortunately for him he wakes up almost 2 weeks later with absolutely no memory of where he has been or what has happened to his sister. Naya is a powerful witch with the ability to sense stolen and corrupted magic, her tribe's sacred duty is to track that magic and to kill those who have been damaged by trying to use it. She is drawn to Ronan because she can sense the dangerous magic inside him but at the same time there is something about him that resonates with the very heart of her and she can't bring herself to hurt him. Unfortunately someone or something has left Ronan's magic corrupted and unless Naya can find a way to remove it before it turns him into a monster she might be forced to kill him before he can destroy the people she cares about most.

Although I liked the first book in this series I did have a few problems with both of the main characters, the world was interesting enough that I was willing to give it another try though and I'm very happy to say that Kate Baxter has definitely upped the ante in The Vampire Warrior. Not only has she expanded her world building to include witches and shapeshifters alongside the vampires and dhampirs but she also gave us two main characters who were likeable from the beginning. Naya is a powerful woman in her own right but she is sick of being treated like a possession by the male members of her tribe.

The Bororo culture is very male orientated even though it's only women who have the skills to detect and reclaim magic like Naya does. The males instead have the ability to shift into jaguars which makes them powerful in a different way and they hold this power over the women's heads. Naya is one of the few females left with her abilities and because of that her tribe want to see her mated as quickly as possible so that she can start giving birth to a new generation of witches. Unfortunately for Naya they aren't happy about her independent streak but she is equally unhappy about the idea of being forced into mating a man she doesn't love and having to give up her hunting duties.

Ronan never expected to find his mate but he becomes tethered the moment he sets eyes on Naya and that proves she is the only woman for him. Unfortunately, he was so convinced that he wouldn't find his mate that he has already made a blood vow to another woman and now if he acts on his feelings for Naya it could be the death of him. Now Ronan not only has to figure out a way to handle the dark and dangerous magic inside him, he also has to track down his missing sister and find a way to get Siobhan to release him from his vow. Naya has a lot of trouble accepting that Ronan is her mate, she is reluctant to escape one forced mating by being pulled into another and she is determined to fight Ronan every step of the way. She does agree to help him find Chelle along with a way to get rid of the magic though, especially since it quickly becomes clear everything is linked to a surge in magical demons in the area.

I really enjoyed the push and pull between these two. It can be hard to pull off a romance when characters are fated mates with an immediate bond but I thought the way things progressed by Ronan and Naya were believable. I understood her reluctance but enjoyed the seeing her come around to the idea as she spent more time with Ronan and realised that he was proud to fight at her side and didn't want to lock her away in cotton wool. Ronan was the right amount of possessive and growly alpha without veering too far into controlling and over the top territory. He was protective of Naya but in a way that didn't stifle her and he appreciated the strength he could see in her.

My slight complaints about the story were that it was a little too easy to guess who the mastermind behind everything was. I also could do without seeing the hero from the next book screwing around with women that aren't his mate. We had to watch Ronan with Siobhan in The Last Vampire (in scenes that quite frankly turned my stomach!) and in this book we got to watch Jenner (the hero of The Dark Vampire) working his way through a whole bevy of dhampirs. I like getting to know future characters but would rather do it outside of the bedroom please. I also thought the plot with Ronan's blood vow to Siobhan fell a little flat, I would have loved to see her character brought down a peg or two since she's been such a nasty piece of work since the beginning of the series and I didn't like the way they gave her such a brilliant gift for his freedom. I had been looking forward to seeing Naya go in there, prove that she was much more powerful and make Siobhan back off so that was a little disappointing.

Overall I enjoyed this book much more than the first though, this series is really starting to come into it's own and I'm looking forward to reading the next one.