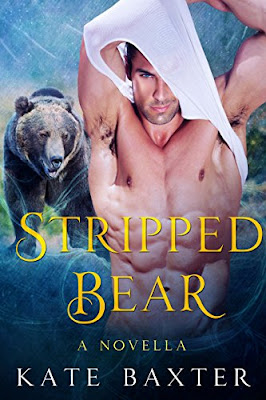 Get lost in the powerful, sexy novella by Kate Baxter where one alpha shifter will do whatever it takes to claim the woman he can *bearly* resist...

Caden Mitchell is the ultimate alpha. Known to most as a smoldering hot billionaire, his secret weapon- the ability to shapeshift into a strong and deadly bear- allows him to be the most ruthless enforcer of the Sortiari, a paranormal organization tasked with keeping the course of Fate on the right track. But when the ailing health of his grandmother leads him back home, the luscious curves of his childhood nemesis will be too much to resist...

Leah Ridgeway never expected Caden to give her the time of day. With his abs cut from stone and powerful, strong arms, she knows there's no chance he's interested in her handful of curves. But Caden is tormented by thoughts of her beautiful body. And when evil threatens Leah's very life, Caden will stop at nothing to keep her safe...and claim her as his mate...in Stripped Bear.

Review:
It's been sixteen years since Caden last saw Leah and he broke her heart then by walking away from her after she told him she loved him. To be fair she was only 14 at the time and since he was 21 there's no doubt he made the correct decision but he could have been a bit nicer in the way he handled things. The two are thrown back together now because Caden's grandmother has decided to do a little meddling, she's always known the two would make a perfect couple and since Leah is now engaged to someone else she's decided to act before it's too late. The moment they meet again Caden realises that Leah is his destined mate but since she doesn't even know that he's a shapeshifter he's going to have a lot of explaining to do before she accepts it.

I've already read the first three books in Kate Baxter's Last True Vampire series but for some reason I seem to have skipped over the prequel novella, something that's not like me at all since I'm usually a stickler for reading series in order. Anyway, I thought it was about time I fixed my mistake so I'm completely up to date before the next book releases. I have to admit I was a little confused when I saw who the main characters were, I could be wrong but I don't remember either of them making an appearance in the books I've read so they seemed a weird place to start the series, especially since most of the character's we've had contact with so far have been vampires. I always love a good shifter story though so it didn't put me off reading.

I know this is a novella and things have to happen quite quickly but I never managed to connect with either of the characters as much as I hoped to. They had great chemistry and we do learn about their history but I never felt as invested in them as I should have and that made the novella fall a little flat. There was nothing particularly wrong with their romance but it just wasn't all that memorable either. Another disappointment was the lack of world building, I'm obviously familiar with the world but one thing I was really hoping for was more information on the Sortiari since Caden works for them as an enforcer and they've always been a bit of a shadowy organisation in the rest of the series.

I guess was just looking for some extra background information or something to tie this story to the other books but I didn't get it so the whole novella feels a bit superfluous. I'm really enjoying the series as a whole though so if you weren't the biggest fan of Stripped Bear don't let that put you off continuing the series, if you did enjoy this story then you're bound to love the full length books even more.