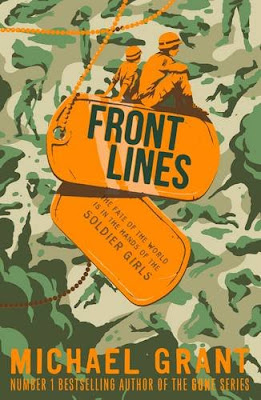 Just when you thought Michael Grant’s GONE series had taken us to the darkest limits of his imagination, the evil genius of young adult fiction is back to take you to the Front Lines of terror. In the tradition of The Book Thief, Code Name Verity and Between Shades of Gray, Front Lines gives the experience of WWII a new immediacy while playing with the ‘what ifs?’ of history.

It’s WWII, but not as you remember it from history lessons! This time the girls aren’t stitching socks for the brave boys at the front. Meet 17-year-old Rio Richlin and her friends Frangie Marr and Rainy Schulterman, three of the newest recruits in the US Armed Forces. They stand shoulder to shoulder with the boys from home as they take on Hitler’s army.

In the face of reluctant colonels and sceptical sergeants, the teenage soldier girls must prove their guts, strength, and resourcefulness as soldiers. Rio has grown up in a world where men don’t cry and girls are supposed to care only about ‘money and looks’. But she has always known that there is something wrong with this system and something else in her. Far from home and in the battlefields, Rio discovers exactly who she is and what she can accomplish

The first in an exciting new young adult trilogy. Front Lines is the saga of a modern teenage heroine in an alternate past that could only have come from the man who gave us GONE, BZRK and Messenger of Fear.

Review:
I have to admit that Front Lines isn't the type of book I usually pick up but I was intrigued by the premise when Egmont sent me a copy for review so I decided to give it a try. This is my first book by Michael Grant (although I've heard amazing things about his Gone series) but it definitely won't be my last because he's an incredibly skilled writer. I think it's a difficult thing to rewrite history in a way that's believable, you're walking a fine line between creating something amazing and incredibly thought provoking or coming across as insensitive, especially when you're writing about something like WWII and the millions of people who died during the conflict. Luckily Michael Grant has come down on the correct side of that line and Front Lines is just an incredible read on every level.

It's obvious that the author done a huge amount of research into WWII and a lot of the battles and scenarios included in this book are based on real events. He's just made one major change, one that meant women were not only allowed to voluntarily enlist in the army but were actually subject to the draft just like men were. It doesn't sound so shocking now but we're talking of a time when the army was segregated so that white and black soldiers didn't even serve in the same platoon so adding girls to the mix just makes things even more complicated. Michael Grant doesn't shy away from the racism and anti-semitism that was much more prevalent at that time and the female soldiers are also subjected to prejudice because of their gender. It's not always comfortable to read about the attitudes of some of the white male soldiers but it is completely believable and realistic to how things would have been in that era.

Front Lines follows the journey of three female American soldiers who all signed up for very different reasons and whose army careers take them in very different directions. First we have Rio Richlin who almost enlists by accident thanks to her friend Jenou, Rio has already lost her sister in the war and she wants the chance to make a difference herself but she's not quite prepared for the shock of becoming an infantry soldier. Frangie Marr has always dreamed of becoming a vet but money is tight and her family need the paycheck that she can get by enlisting so she puts her future on hold to sign up, her path sees her training as a medic but that doesn't mean she's safely away from danger, in fact she's right there on the front lines patching up the wounded soldiers as fast as possible. Rainy Schulterman knows something horrible is happening in Europe, the complete lack of contact the Jewish community is getting from family and friends abroad is enough to convince her that she needs to play a part in this war and of the three she's the most determined to get over there and start kicking some Nazi butt.

I don't want to talk much more about these three girls individual stories, instead I'd like to focus on the friendships they make along the way and the loves they find and lose while going through their training. We get the chance to meet some wonderful side characters from all walks of life, there are moments of sheer terror but there is also humour and companionship, it's the bond they all form with the other members of their squads is what will help them push through the fear they feel. None of the girls expected to be sent to the front lines but times are desperate and the army needs every able body it can get if they want to have any chance of winning. We're talking young girls and boys who are barely old enough to get married and yet they're now half a world away from home and fighting for their survival. I know girls weren't really on the front lines but the point is they could have been and hundreds of thousands of boys were in this exact situation. It's a sobering thought when you look at things through their eyes and see just how terrified they must have been.

This is the kind of book that I think should be included in school curriculums, it puts such a personal spin on the horror of WWII and the inclusion of female soldiers just makes it even more accessible for everyone to read. Front Lines is an outstanding novel and I can't wait to get my hands on the rest of the trilogy.

If you're still not sure whether you want to read this book check out the trailer below, I'm pretty sure it'll convince you to give it a try: