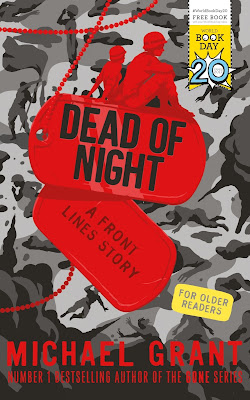 Set in the alternative World War II scenario of his Front Lines novels, Michael Grant, author of the bestselling GONE series, has written this story exclusively for World Book Day 2017.

Rio Richlin doesn’t have superpowers. She is an ordinary young woman. A soldier in the American army, wearing a uniform, carrying a rifle, and fighting alongside thousands who are trying to make a difference, trying to change the world.

At least, that’s the plan. Right now she’s part of a squad on a training exercise in some place called Wales. They’re cold, they’re wet, and Rio’s pretty sure they’re also lost. Spending the night in a creepy old inn wasn’t part of the plan at all…

Rio's only training. But soon, the fate of the world will be in the hands of the soldier girls.

Review:
Dead of Night is set in the world of Michael Grant's Soldier Girls series, a reimagined version of history where American women were actually included in the draft to become soldiers in WWII. As far as the timeline goes this is set somewhere in the middle of the first book, after Rio and her squad have finished their first 13 weeks of training in America but before they're sent to the frontline. They're actually in Wales on another training exercise when they get lost in the fog. Unable to find their way back to base they take shelter in a village pub that they stumble across.

I don't really want to say too much more because it would be easy to give too much away but this was a fun story and a nice addition to the series. It's very different to the full length novels though, where they are very much grounded in reality and almost feel like you're reading true life war diaries this story is a little more surreal and it took me a while to figure out exactly what was going on. I think the nature of the story won't necessarily appeal to everyone but I thought it was very clever and I enjoyed reading something different, I do think events that unfold have a profound effect on Rio so whether they're real or imagined you'll definitely notice the difference in her from Front Lines to Silver Stars.

This has quickly become one of my favourite series so it's one I'd highly recommend, I'm not sure that Dead of Night is the best place to start but if you're read Front Lines then it's well worth giving this a try.