Today I'm thrilled to be taking part in the blog tour for Vivien Jackson's upcoming novel Wanted & Wired. I have a fab guest post from Vivien and a giveaway to share with you but first let me give you all the details about the book! 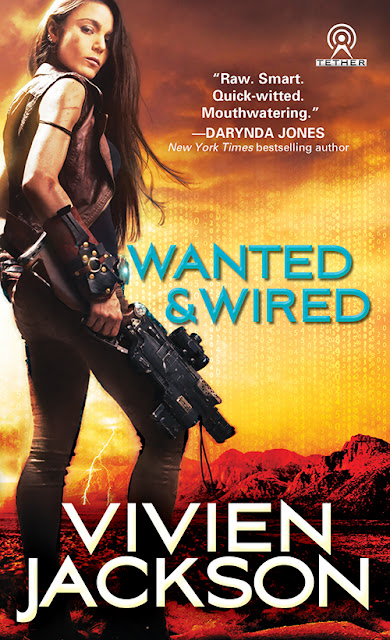 A rip-roarin’ new snarky, sexy sci-fi paranormal romance series with the perfect balance of humor, heat, and heart. Now that Texas has seceded and the world is spiraling into chaos, good guys come in unlikely packages and love ignites in the most inconvenient places…

Rogue scientist • technologically enhanced • deliciously attractive
Heron Farad should be dead. But technology has made him the man he is today. Now he heads a crew of uniquely skilled outsiders who fight to salvage what’s left of humanity: art, artifacts, books, ideas—sometimes even people. People like Mari Vallejo.

Gun for hire • Texan rebel • always hits her mark
Mari has been lusting after her mysterious handler for months. But when a by-the-book hit goes horribly sideways, she and Heron land on the universal most wanted list. Someone set them up. Desperate and on the run, they must trust each other to survive, while hiding devastating secrets. As their explosive chemistry heats up, it’s the perfect storm…

I’m nervous about this. I’m a--oh dear, how to say it?--a romance writer. In love with science fiction. Deep love, big L. We’ve been seeing each other on the sly for a long time, science fiction and I, and when two grown-up genres love each other very much, sometimes they … oh, hell, I wrote a book. A mixed-genre one. Now I have to introduce my family to his and decide who sits on which side of the aisle, and what do we tell the children?

I’m not worried about his family. I love them almost as much as I love him. They’ve let me hang out at all their family reunions (cons), even the few, back when, where I was the only girl in the room. But I never brought a plus-one from romancelandia to a spec-fic shindig before.

Not because I was ashamed of my roots, mind you. Because whatever folks may or may not know about romance fiction, it’s crammed full of some awesome stuff, even some common ground. So, future in-laws, may I introduce a few romance novels I think you might enjoy?

1. The truth is, this probably isn’t a new thing at all. You’ve probably already read at least one romance. I’m not even kidding. There are a boatload of books shelved under science fiction that bear the structure and elements of romances, including a focus on female characters with agency and a generally optimistic ending. Off the top of my head, I could recommend books by Catherine Asaro, Sharon Lynn Fisher, Linnea Sinclair, and Ann Aguirre. The list would be much longer if we included books in the fantasy section that are also sneakily romances. So, see? We’re not that far apart, right off the bat! You already know stuff about romance. Be confident stepping into that aisle at your local bookstore, because you have experience here! But, just to make it easier, here are a few specific books you can look for.

2. Pride and Prejudice, by Jane Austen. I know you know it, or the Colin Firth BBC version at least, and I know bits and pieces of it have even shown up in some historical fantasy steampunkish stories. Oh sure, this book features a lot of people chatting in drawing rooms and drinking tea. And yes, there’s a marriage proposal. More than one. But! This is also an excellent book about people, about society and how we assume things about each other and why we maybe shouldn’t. The characters are clever, insightful, and strong. Plus, any given woman you meet has a statistically significant chance of harboring a secret longing for her own Mr. Darcy. So it’s good to know this book.

3. Sweet Starfire, by Jayne Castle (Jayne Ann Krentz). This is kind of the book that started SFR. It takes a familiar-to-romance-readers plot and sets it in a futuristic other galaxy. Krentz is a super accomplished romance writer (if you’ve never heard of her, you probably haven’t bought groceries or anything at a big-box store in the last three decades) who also treats SFF tropes with respect. In this book, she blends the genres seamlessly. Although Sweet Starfire does sometimes have that mid-1980s feel, it’s a solid story and sub-genre canon.

4. Ravishing the Heiress, by Sherry Thomas. Honestly, read any book by Sherry Thomas and you’ll want to kidnap her and make her write nothing but your favorite genre forever. Don’t give in to the temptation. Romancelandia has dibs (even though she’s written some YA fantasy and one Sherlock Holmes historical mystery that’s sooooo good… more on that in a bit). Ravishing the Heiress is my favorite of her books, but I could recommend any of them. Her heroines are smart, capable beyond the expectations of their class or time, and complicated, and her worldbuilding is amazing. Yes, we do have worldbuilding in romance. A lot of it, in fact. Just check out Ms. Thomas’s use of food in any given book. (Also, Charlotte Holmes, her female-Sherlock character in A Study in Scarlet Women? Could totally step into a time machine and come out as a 21st century badass. If she, you know, started running with an urban fantasy crowd.)

Because, honestly, even though sci fi and romance don’t have much in common materially, they do have this: both genres, when done properly, reveal the human condition. They’re about characters growing, becoming wiser, about forcing us to see our world and all its ugly, blurry issues through a fresh lens. The chief difference, in my opinion is that romances conclude that all that darkness is going to get better, eventually, if we just have a lot of sex love each other.

p.s. – NPR put out a list of the best 100 romance novels--http://www.bookadvice.co/100-romance-books.html--and I was pleased to see several of my picks here make that list. Check it out, if you wish. It contains some real gems. 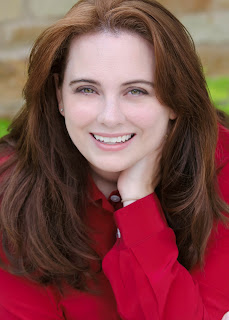 VIVIEN JACKSON is still waiting for her Hogwarts letter. In the meantime, she writes, mostly fantastical or futuristic or kissing-related stories. When she isn’t writing, she’s performing a sacred duty nurturing the next generation of Whovian Browncoat Sindarin Jedi gamers, and their little dogs too. With her similarly geeky partner, she lives in Austin, Texas, and watches a lot of football.

Thanks to Sourcebooks I have a copy of Wanted & Wired to give to one lucky winner. The giveaway is open to US entries only and you can enter using the rafflecopter form below. The prize will be sent directly by my contact at Sourcebooks so the winner will need to give me permission to pass on their address.