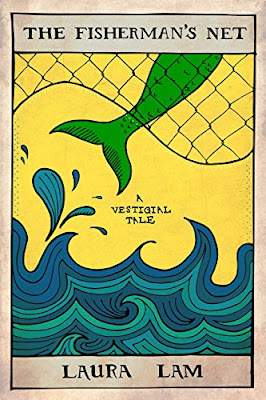 A humble fisherman in a village of the coast of the island of Linde buys a trinket at the market, which he discovers is Vestige. The poor man soon becomes the best fisherman in the village and marvels at his newfound wealth. One day, he ensnares a most unusual catch: a Chimaera sea maiden that isn’t meant to exist. And he’s not sure if he can let her go.

Review:
Laura Lam's Vestigial Tales are short stories set in the same world as her Micha Grey trilogy and give us some insight into some of the Vestige artefacts that were left behind when the Alder vanished. The Fisherman's Net doesn't feature any characters from the other series so works well as a standalone and can be read at any point wether you've read the Micha Grey books or not.

This was a much shorter story than The Snake Charm but as it's told more like an original fable the shorter length worked really well. The Fisherman's Net is the story of a man who finds a magic net that helps him become the wealthiest fisherman in his village. You'll have to read it for yourself to find out whether he puts that wealth to good use or if greed takes him down a dangerous path.

This is the kind of story that Micha and Dustin would have had read to them as children and I really enjoyed getting a further glimpse into their world.