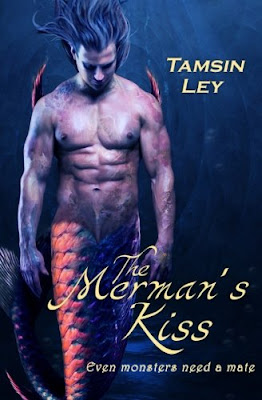 Even monsters need a mate.

After the death of her child, Brianna seeks to end her life within the ocean’s final embrace. Instead, she falls into the arms of a sexy, sleek-tailed monster. He’s wild, seductive, and sets her blood on fire every time he touches her, and soon she begins to need him for more than his magic to breathe underwater. He might just give her a new reason to live.

Zantu has evaded the mate-bond for thirty-five years, dodging promiscuous mermaids with vile intents. Unlike mermaids, mermen bond for life, and Zantu refuses to accept the heartbreak most mermen die of. That is, until the glint of gold catches his eye, and a simple salvage mission turns to passion. Now he’s bonded to a human, and begins to wonder if bonding to the right mate might not be so bad. The problem? A finless female won’t live long among the dangers of the sea.

Now Zantu must choose between keeping her at his side, and keeping her safe. Either way, he’s sure he’ll end up with a broken heart.

Mates for Monsters Series:
The Merman's Kiss
The Merman's Quest (Free story for subscribing to the author's newsletter)

Review:
When Brianna tries to end her life by stepping off the end of the pier she immediately regrets her choice, unfortunately she tied weights around her waist and now she can't get free to rise to the surface. When she's rescued by a mysterious Merman she's not sure if she's hallucinating because she's drowning or whether she's already dead but it turns out he's claimed her as his mate and now he wants her to stay in his underwater world with him.

My first issue was a couple of pages in when we see Brianna try to kill herself. She immediately changes her mind and tries to remove the weights she tied to her waist to make sure she sank to the bottom of the ocean. Of course she doesn't manage to remove the weights but she does manage to strip off all her clothes "accidentally" in the process. Which actually comes in pretty handy for her when she's nearly dead and a stranger grabs her from behind. She's literally about to pass out from lack of oxygen when merman Zantu appears, he kisses her to somehow magically give her the ability to breathe underwater and in that very moment all she can think about is how horny she is so she ends up jumping him. Yes, you heard that right, she's seconds from death and her first thought is "yay lets have sex with this hot merman". Talk about insta-lust. Especially since having sex triggers Zantu's mating bond!

My biggest problem was probably to do with the way all of the mermaids were portrayed though. Literally every single mermaid was an evil slut who would sleep around with anyone, they took great pleasure in trying to make the mermen bond with them but then enjoyed being unfaithful even more. The mermen were the ones who stayed home and looked after the kids (most of which probably weren't even their own!) and since they could only bond with one woman they literally end up dying of broken hearts from watching their mates sleep around with other men. I get trying to switch up gender roles but why do women constantly have to put other women down? Why do all the mermaids have to be evil? Why are all the mermen nice? I just don't see the need for that and it actually makes me angry.

Once we get past the first couple of chapters I actually enjoyed the story more, I liked both Brianna and Zantu and I enjoyed meeting his brother Rubac and little Ebby. I think if the book had focused more on developing the characters and letting them spend time getting to know each other rather than rushing their first sexual encounter I'd have enjoyed it much more. I liked the description of Zantu's underwater world, the home he had made and his way of life was well described and easy to picture. The playful fish and other sea creatures added a nice element too. A few little random things threw me out of the story on occasion though like the way Brianna kept describing how things smelt. I'm sorry but even if you've developed the ability to breathe water you're not going to be able to smell things at the bottom of the ocean!

The ending also felt a little rushed, I wanted to see more of how things worked out for Brianna and Zantu (perhaps an epilogue would have helped there) and I was really upset that we didn't find out what happened with Rubac and Ebby. I've since discovered that you can get a free short story called The Merman's Quest by signing up for the author's newsletter and from the brief description on her website it sounds like this might be Rubac's story so hopefully my questions will be answered here. So I didn't love this book as much as I could have but its the author's debut novel and it had potential. I'm definitely going to be reading the short story in the hope of getting answers and I would consider trying the next full length book in the series to see if the author's writing has improved.