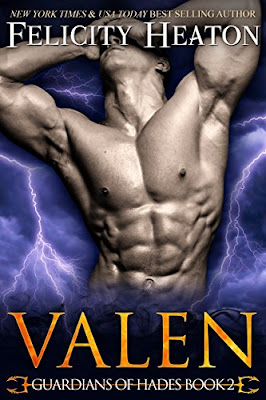 Prince of the Underworld and Lord of Lightning, Valen was banished from his home by his father, Hades, two centuries ago and given a new duty and purpose—to keep our world and his from colliding in a calamity foreseen by the Moirai.

Together with his six brothers, he fights to defend the gates to the Underworld from daemons bent on breaching them and gaining entrance to that forbidden land, striving to protect his home from their dark influence. Cursed by Zeus to never know love again, Valen has brought up barriers around his heart to protect it, but with each new barrier he creates, the dark hold his power has over him grows, becoming all he needs.

Until the night he finally crosses paths with the assassin who has been watching him from the shadows, a bewitching mortal possessing the name of an angel and the skills of a devil—a woman who awakens his passionate heart and stirs dangerous desires.

Eva has built a fearsome reputation for herself in Italy’s underworld, but her latest job in her beloved city of Rome has left her feeling that she has stepped into a dangerous world and this mission might end in her death—either at the hands of her mysteriously seductive client or by the blade of the wickedly alluring warrior who is her target.

As the threat from the daemons escalates and more than just the Rome gate becomes their target, will Valen be strong enough to face the fears in his heart and the ghosts of his past to claim everything he desires or will they lure him deeper under their spell and into the darkness?

Review:
Valen is the second book in Felicity Heaton's Guardians of Hades series and I have to admit I wasn't sure what I'd make of Valen because he wasn't exactly the nicest of the brothers in the previous book. I know Felicity is brilliant at changing my minds about her characters though and she proved that again here, I think I actually ended up loving Valen even more than Ares!

Valen's ability revolves around controlling lightening which makes him a powerful enemy to have and someone you definitely want at your back in a battle. He also has a curse that we weren't aware of before though, one laid on him by Zeus before the brothers were exiled to earth to protect the gates to the Underworld. I don't want to talk much about what he did to earn the curse or what the curse actually entails but once you know the details and start to see the way it effects him it makes it much easier to understand why he's so standoffish compared to the others. I didn't really notice in the first book that the brothers all treat him differently to the way they treat each other but it kind of broke my heart seeing how on the outside he always was around them.

Eva is an assassin who was initially hired to track Valen's movements and report back to her employer but the requests he makes of her have started to become more and more strange and she's now really worried for her own safety if she doesn't follow through on what she's promised. She had no clue about the supernatural creatures around her and now she's caught up in the middle of a battle that has been going on for centuries. As a normal human she doesn't stand a chance against gods and daemons but she has a few skills up her sleeve and most importantly she has the will to survive so she'll do whatever it takes to make sure she comes out on top, even if it means allying herself with the man she was initially sent to kill.

I thought Valen and Eva were great together and what I loved most was the way Eva was willing to stand up to Valen's brothers on his behalf. She saw things about Valen that none of the others have ever noticed and she really gave them a few much needed home truths about the way they treated him. They had brilliant chemistry but they also made great partners in battle and even though Eva isn't as physically powerful as Valen she fights by his side and always has his back. We get to see plenty of the other brothers too and as much as I loved Valen I'm practically dying of curiosity about Esher now. I'm so excited that his book is next and I can't wait to read it!