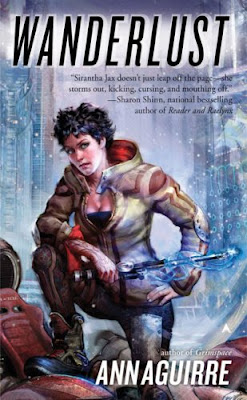 Sirantha Jax doesn't take chances . . . she jumps at them.

Sirantha Jax is a "jumper," a woman who possesses the unique genetic makeup needed to navigate the faster-than-light ships through grimspace. Jax has worked for Farwan Corporation her entire career. But now word's out that the Corp deliberately crashed a passenger ship, and its stranglehold on intergalactic commerce has crumbled - which means Jax is out of a job.

She's also broke due to being declared dead a little prematurely. So when the government asks her to head up a vital diplomatic mission, Jax agrees to do it. Her mandate: journey to the planet Ithis-Tor and convince its inhabitants to join the Conglomerate.

But Jax's payday is light-years away. First she'll have to contend with Syndicate criminals, a stormy relationship with her pilot, man-eating aliens, and her own grimspace-weakened body. She'll be lucky just to make it to Ithis-Tor alive . . .

Review:
After absolutely falling in love with this world and these characters when I read Grimspace I couldn't wait to dive into Wanderlust. It's not often I find a series as addictive as this one and I'm happy that the second book continued that trend, I wouldn't say this was quite as good as the first book but it wasn't far off it and I'm still incredibly excited about reading the rest of the series. Where Grimspace was full of action and humour Wanderlust takes a darker turn, it still had it's humorous moments but there was some relationship drama that made it a little more angsty. The side characters and the amount of action pulled me through that though, there was enough going on that I could easily ignore the things that irritated me and I still love this world.

I love some of the changes we've seen in Jax, the way she wants to be a better person and how she tries to do the right thing is great but I do find it annoying that she tries to do everything on her own and doesn't ask her friends and crew for assistance even when she really needs their help. I also didn't like the way she tried to push Marsh away "for his own good", you don't get to make that kind of decision on someone else's behalf - especially not when you're hurting them in the process! I guess it was more realistic that their relationship wouldn't be plain sailing though, they both have difficult pasts and thats bound to effect the way they deal with things and lets face it they've not really had much time to get to know each other yet. I actually respected Marsh for his decision to stay behind to help Keri with her battle, she obviously needed his help and she's like a little sister to him so I think it's important that he didn't just abandon his family for Jax. It was still disappointing to see Jax and Marsh separated for so much of the story though and it's going to be interesting to see how their relationship proceeds now he's such a different man.

The side characters continue to be one of my favourite things about this series. I love that Ann Aguirre is happy to surround Jax with strong women as well as men, that's something we don't always see enough of. Dina and 245 remain favourites but we also have a new addition to the kickass women of the crew in Hit, a lethal assassin who luckily is on Jax's side (well for now anyway, let's hope she remains there!). The boys are still represented too and Vel is definitely one of my favourite characters in the series, for a shapeshifting giant praying mantis he's actually a pretty sweet character but he's always full of surprises and definitely a good person to be near in a fight. I love new addition Jael, what we've learned about his background is intriguing and definitely left me wanting more, he's a fun character but I'm a little nervous about the apology he made towards the end of the book so I'm going to be keeping a close eye on him in the future.

This series has quickly become one of my favourites and I can't wait to continue reading it.