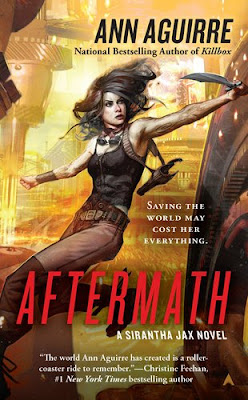 Dead heroes get monuments. Live ones get trials.

Sirantha Jax has the right genes - ones that enable her to "jump" faster-than-light ships through grimspace. But it's also in her genetic makeup to go it alone. It's a character trait that has gotten her into - and out of - hot water time and time again, but now she's caused one of the most horrific events in military history . . .

During the war against murderous, flesh-eating aliens, Sirantha went AWOL and shifted grimspace beacons to keep the enemy from invading humanity's homeworld. The cost of her actions: the destruction of modern interstellar travel - and the lives of six hundred Conglomerate soldiers.

Accused of dereliction of duty, desertion, mass murder, and high treason, Sirantha is on trial for her life. And only time will tell if she's one of the Conglomerate's greatest heroes - or most infamous criminals . . .

Review:
It's taken me a long time to write a review of Aftermath, probably because I still can't quite decide what I think of everything that happened in it and I'm kind of torn at this point over whether I even want to read the final book in the series. On one hand I want to know how it ends but on the other I'm pretty nervous because I'm not sure I like where the series is going. Anyway, let's focus on Aftermath for now and leave fears of Endgame until this review is finished!

I knew that the aftermath of Sirantha's actions at the end of the previous book were going to be catastrophic and I wasn't wrong, changing the Grimspace beacons has made interstellar travel practically impossible to anyone but Jax and until she trains a new wave of Jumpers the entire galaxy is going to pay the price for her actions. Even worse is the number of ships that were lost mid-jump due to her actions. So I get why she did what she did but I'm so angry for her that she didn't think things through and at least try to get a warning out, she was so determined to avoid March so that he wouldn't know what she was up to that she didn't bother to warn anyone of the consequences. Just a little more thought and she could have saved hundreds of lives so I'm angry with her reckless behaviour. Yes she did the right thing and yes she feels guilty about the people who died as a result but it wasn't quite enough for me.

Of course now she has to pay the price for her actions so the first part of the book is Sirantha on trial for  dereliction of duty and mass murder. This gives the author a good excuse to send our favourite couple in opposite directions again as March leaves to search for his nephew while Sirantha is stuck in a prison cell. At this point I just don't understand why these two ever became a couple, what was the point of creating this epic romance between them when they spend so much of their lives apart? I had such high hopes for them at the beginning of the series but now it just feels like I'm being emotionally manipulated by the drama that constantly occurs to keep them apart. Events at the end of Aftermath were both heartbreaking and utterly infuriating and I'm honestly not sure that I care about them as a couple anymore. Sirantha is too selfish to ever put March first and March is just wasting his life sitting around waiting for her.

Vel has been one of my favourite characters since he was introduced and he continues to be his awesome self. He's the saving grace of this series and I loved that we saw so much more of him in this book. I've always loved the friendship between him and Sirantha but I have to admit I'm worried at the hints of love-triangle developing here. That's not what I was expecting and I'm not happy about it. I did love the scenes with Baby Z though and events when they visited his planet were really interesting. I really enjoy exploring this world and I love Sirantha when she's on top form exploring new territory. I just hope the next book focuses more on their discovery than on doomed relationships and potential love triangles.