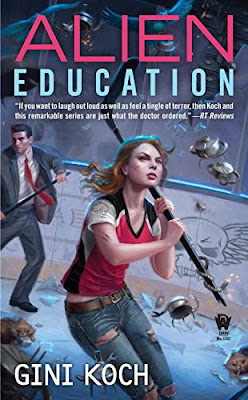 It's a typical day of bureaucracy and stress for President and First Lady Jeff and Kitty Katt-Martini, in part because kitty's been tapped to represent Earth in the Galactic Council. Kitty feels that's a bad idea, and she might be right.

When her first official TV morning show goes awry, it's only the quick thinking of the actor determined to make the "Code Name: First Lady" movie a reality that saves the day. It also forces Kitty to work with Hollywood.

Meanwhile, the Embassy Daycare kids are all about to enter "real school" - and none of them want to go. They may have grounds to be concerned because many of the other students and their families seem shady, and everyone seems to have an evil agenda.

Dealing with the assimilation of the aliens who have come to Earth, while fending off advances from a variety of Hollywood types, seems like Kitty's biggest challenge. But then she and Jeff discover that Stephanie Valentino - Jeff's niece and the true Heir Apparent to the original Mastermind - is back.

Can Jeff and Kitty thwart the most insidious attacks yet, while keeping tenuous peace on Earth and goodwill towards all sentient species going? And can they also find time to be part of the most truly terrifying organisation they've ever encountered - the school's parent-teacher association?

Review:
It's hard to believe that we're 15 books into this series now but I'm very happy to say that its still just as much fun to read as it was in the very beginning. Gini Koch has created such a unique world populated with a giant cast of regular characters and an ever growing variety of alien species always ready to either cause trouble or save the day. Picking up one of these books is like going to visit old friends and it always amazes me how easily I'm able to slip back into this world and remember exactly who all the main players are.

As usual the story is full of action pretty much from the first page and there is plenty of Gini's trademark humour to make you giggle alone the way. Kitty and Jeff are trying to help the various alien refugees settle into their new home on earth while trying to figure out who is behind the latest robot doubles that keep crawling out of the woodwork. As if running a country and trying to help smooth Earth's entry into the Galactic Council wasn't enough they're also facing every parent's biggest nightmare when Jamie and some of the other embassy kids have their first day at school - the parent-teacher association. Truly if you thought the superbeings from the early books were bad just wait until you come across the head of the PTA!

We're back to the good old days where Kitty is right there in the middle of all the action, from food fights at the school bake sale to dance-fighting on ice at a fundraising hockey match Kitty is fighting to protect her family and friends from their enemies. It's no wonder Hollywood are so excited about the idea of turning her life story into movie "Code Name: First Lady", along the lines of mission impossible it has box office hit written all over it! Of course Kitty has never been one to crave the limelight and she'd much rather be left in peace to get on with her life but the public have never been so keen to see more of the First Lady and the President.

I don't want to say too much more but if you're a fan of this series then you're in for a real treat with Alien Education. It's everything you could want and then some and I'm so happy that the series is still going strong. I can't get hold of the next five books fast enough!