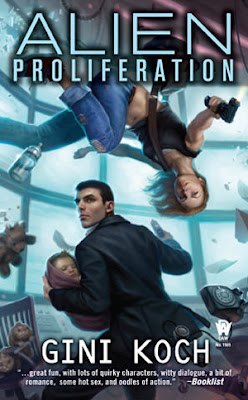 After the wildest wedding ever, Katherine "Kitty" Katt-Martini and her Alpha Centaurion husband Jeff are hoping life will settle down.  But alien attacks are on the increase, and someone is testing a dangerous new drug on unwilling subjects within their group.  As if that's not enough, Kitty and a number of the A-C women are expecting their first babies.

No one is certain what this baby boom will lead to, but after almost losing Kitty in childbirth, they discover that their newborn's talents are off the charts - and potentially dangerous.  And just to add to their worries - the bad guys want their baby.

The last thing anyone in Centaurion Division needs after that is a conspiracy to kill the heads of the C.I.A's Extra-Terrestrial Division and the Presidential Terrorism Control Unit, otherwise known as Charles Reynolds and Kitty's mother, Angela Katt.

Then suddenly, key members of Alpha and Airborne start vanishing.  Can Kitty, her remaining team members, friends old and new, and a totally unexpected new partner rescue everyone and figure out how and why Kitty's become a superhuman?  Most importantly, can they pull it all off before the event Kitty dreads most - her Alpha Centaurion baby shower?

Review:
Alien Proliferation picks up the story several months after the ending of Alien in the Family with Kitty heavily pregnant and about to give birth to her first child.  Being pregnant with an alien / human hybrid has really taken it out of our heroine though so she is stuck on bed rest and feeling rather cranky, luckily she has superdad-to-be and empath Jeff on hand to anticipate her every need.  The bad guys aren't going to wait until after the happy event to start causing trouble though and things are going downhill fast.  What with a plot to kill both Kitty's best friend and her mother, team members disappearing, a potential mole and some unexpected drugs testing they are in for a bumpy ride.  Can Kitty figure out who is behind it all so she can relax and enjoy being a new mum?

It's official, I'm an addict!  I literally can't get enough of this series and I don't know how I'm going to survive the four month wait for Alien Diplomacy (yes I have already pre-ordered my copy!).  This has become an all time favourite series and now I've finished reading Alien Proliferation all I really want to do is pick up Touched by an Alien and start re-reading the books again from the beginning.  If you haven't started this series yet you really don't know what you're missing.

I absolutely love Kitty, she may be heavily pregnant and going slightly insane from an abundance of hormones but she is still top of the witty banter and she has managed to surround herself with the hottest and most supportive team ever.  Seriously, I can't imagine what she'd do without these guys.  If you've read any of my other reviews for this series then you'll know I'm absolutely crazy about Jeff, I didn't think I could love him more but scenes with him, Kitty and the baby melted me into a puddle.  Even his jealousy is hot and that would normally be a complete turn off for me.  My heart both broke and jumped for joy for Christopher, I'm so pleased with how things are turning out for him.  Chuckie had me in stitches when he was bantering with Jeff (especially one particular scene where he was trying to get Jeff to come home for Kitty) but he also had an incredibly sweet moment with Kitty that brought a tear to my eye.  Reader, Gower and ACE - love, love and love some more along with the fly boys and the rest of team Alpha.  Not forgetting Kitty's new partner who came as a complete shock to me but an absolutely wonderful one.

Alien Proliferation has everything you'd expect from Gini Koch and this series - romance, action, comedy, shocking twists, swoon worthy hunks (both alien and human), a kick ass heroine, great friendships, an ever increasing cast of fabulous characters (some of them even come with uniforms!), witty banter, an adorable baby (so that's a new one but the baby boom is well and truly on it's way), awesome pet poofies and so much more.  OK there may be a little less sex that you'd expect but Kitty has just given birth so even she has to take a bit of a break lol.  A fabulous installment to a fabulous series and one I can't wait to continue!