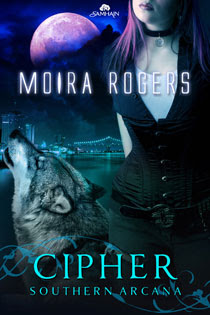 Fourteen months ago, Kat Gabriel's life changed forever when she used her empathy as a weapon. Now she can't escape the weight of those deaths--or the loss of the easy friendship she and Andrew once shared. Obsessed with her mother's violent past, Kat is determined to learn the truth of her inner-darkness by understanding her legacy.

Since the attack that turned him into a wolf, Andrew Callaghan has done everything possible to make himself stronger. More capable of protecting Kat--both from the supernatural world that forced her to kill, and from their own volatile connection. Pushing her away hurt them both, but he's finally made himself into the protector she needs.

As Kat's quest leads her into the darkest underbelly of the psychic world, Andrew is determined to be at her side. But every step forward reopens old emotional wounds and shakes their control. For a dangerous alpha and a deadly psychic, distraction could be fatal--especially when the greatest threat they pose is to each other.

Review:
Fourteen months ago Kat and Andrew were on the verge of taking the first step towards starting a relationship but that all changed one night after a horrific attack.  The attack saw Andrew turned into a werewolf and Kat devastated by the consequences of using her psychic abilities to kill their attackers.  Since that moment Andrew has pushed Kat away, terrified of hurting her because he doesn't have full control over his wolf.  Kat was heartbroken by Andrew's rejection and blames herself for the fact he was tuned.  Can they work through their guilt and anger to find a way to be together?

I absolutely love the Southern Arcana series and it feels like I've been waiting forever to read Kat and Andrew's story.  We have seen this couple throughout the series right from the attack to the way they have skirted around each other ever since so I was really excited that they were finally getting their chance at a happy ending.  There has been a lot of guilt and rejection between them so I knew they wouldn't have an easy journey but we've know all along how much they both care for each other.  Andrew may have been the one to push Kat away but he did it because he cares so much and his actions hurt him just as much as they hurt her.

Andrew may not have been born a shapeshifter but his instincts are all alpha and he is very protective of those he cares about.  I really appreciated the fact that he tried not to be a bossy, controlling alpha because he knows Kat has had enough enough of that last her a lifetime.  It wasn't always easy for him to go against his instincts but just the fact that he was willing to try showed how much he cares for her.  Kat was also changed after the attack, she still has nightmares over killing their attackers and she feels that it was her fault that Andrew was changed into a wolf.  She is still that geeky girl we first met but she has also grown stronger and more sure of herself since that night.  I loved the chemistry between the two of them and Kat's empathic abilities certainly added an interesting dimension to their foreplay - their story is smoking!

I have to admit I wasn't expecting the direction this story took, I thought there would be more about the werewolf politics (especially after the ending of Deadlock!) so was surprised to find it was more about Kat's investigation into the psychic cult her mother was a member of.  However, I really enjoyed the change in direction and it worked well as a backdrop for the development of Kat and Andrew's relationship.  We did still find out a little more about what is going on in the werewolf hierarchy and I'm sure we'll see even more in the next installment.

Cipher was a great installment to the series and I'm really looking forward to reading Impulse when it comes out later this year.  Although this story could be read as a stand alone I would highly recommend reading the series in order.  This really is a great series and one I have been really enjoying!

Source: Won in a Twitter giveaway hosted by the author